Listening to an episode of Science Friday recently about efforts to save corals made me cry. I guess you could say my emotions are sitting very close to the surface in the early days of this new decade. Like a lot of people, I usually spend some of this time around the turn of the calendar in reflection. While there is always pressure to celebrate and set goals and aspirations for making life better in the coming year – or coming decade – this particular New Year’s has left me much more contemplative than happy. We have so much work we need to do to sustain this planet and ourselves in the coming years, and the enormity of it all has hit me on an emotional level. 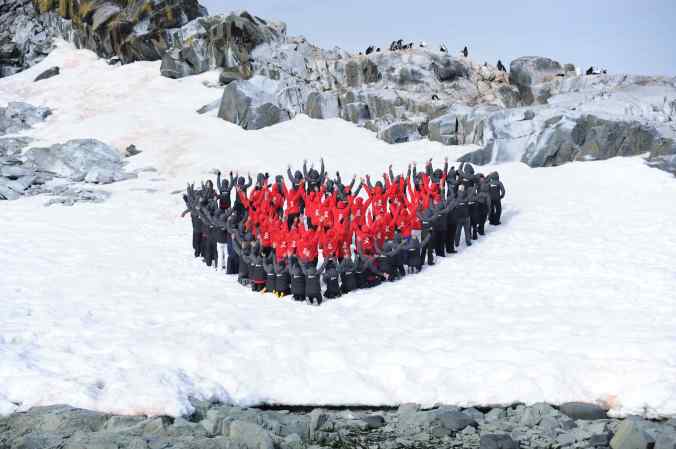 How do we find hope for a better world?

A year ago, I spent the early part of January on a ship somewhere along the Antarctic Peninsula, a place of spectacular beauty, with a group of 80 amazing women from around the world. Together, we explored sheltered coves riddled with icebergs, walked among penguin colonies, and explored what it means to us to deal with environmental change, to have an impact in the world at a time when the world desperately needs to consider rapidly diminishing resources and a changing climate.

Many of the women in my cohort were from Australia – or are living and working in Australia. Let me remind you that this is a country that rivals the United States in terms of clueless politicians that espouse climate denial and a considerable percentage of the public who hold fast to short-sighted nationalistic pride. Australia and the United States. Two countries with the economic privilege and political power to make a positive impact on a world in flux, but have instead retracted into themselves. Two countries – each now with such gaping political divisions that it’s difficult for them to accomplish anything.

In the past couple of months, my Facebook feed has been flooded with images and articles about the bushfires that have scorched Australia. It took a long time for this news to pick up speed in the US media, but at the turn of the year, the images of people fleeing for their lives into the ocean against a backdrop of blood red sky, koalas blackened with smoke, and exhausted kangaroos really began to enter the news cycle. As with images of starving polar bears, I think it’s the suffering animals that really bring people out en masse to step up and help.

The still widespread denial (even if it’s only 33% of the US population, according to Yale Climate Opinion Survey, 2019), apathy, indifference, cynicism regarding climate change (which, by the way, is fueling the conditions that produce such fires), the nationalistic attitude that each country needs to fend for itself – despite the fact that we all share one planet with limited resources, and anything that affects one country affects us all (you think the CO2 released from all these fires will simply hover in a cloud above Australia?) – all of these have led me to feel more contemplative in regard to the coming decade, rather than hopeful.

No. Not simply contemplative. Grief-stricken. And deeply troubled. Climate scientists and activists have long been accused of ‘catastrophizing’ climate change. But it IS a catastrophe. Sure, there are many people – with money and privilege, sitting cushy in their McMansions, who are insulated from the effects so far. I can count myself one of those people (minus the McMansion). Personally, I have not yet been impacted overly much by climate change. I have money, a job, a house, not to mention privilege associated with being white in a country where racism is rampant. I have the economic resources to move elsewhere. The education to find a new job. Water still flows freely from my tap and I can find anything I might desire to eat at a nearby grocery store.

No, this is not yet a catastrophe for me. But it’s a catastrophe for those fleeing their homes, their cities and their countries, because of fire, flood, or prolonged drought has led to the collapse of systems that support life – including political systems. This is a planetary catastrophe that is rolling forward under our feet at a rate that makes someone who has studied long-term climate evolution shudder. By the end of this decade, everyone will feel it in some way or another. Our economy, and our systems for distributing water, food, and energy, will not withstand the impacts of climate change for long.

I joined Homeward Bound because I wanted to feel hopeful about the future again. I NEEDED to feel hopeful about the future if I’m going to teach about climate change. I NEED to be able to prepare my students for what lies ahead – and instill them with hope, too. If we do not carry hope with us, and let it fuel our actions, I think we cannot move forward. Extended sarcasm and fatalism are just as ineffective as climate denial.

That’s me. Contemplating the state of the world from the upper deck of the MV Ushuaia. Photo by Kristen Howard.

One thing I learned from Homeward Bound, and from Ms. Christiana Figueres, in particular, (see her new book, We Choose the Future) is that hope is a choice. It’s also a necessity to move positive change forward. When I choose to see the potential for the world that could exist if we consciously adapt to climate change, I have hope. We are too late to mitigate all change. But adapting to climate change, which means widespread implementation of sustainable living practices and non-carbon energy sources, can raise the standard of living for people around the world. To do this requires building a global democracy, giving everyone a voice at the table – not simply the old guys that have been running the show for the past number of centuries.

This is a future the participating in Homeward Bound let me see.

We are creating this world, one day at a time. This next decade is critical in shaping the future of humanity for a long time to come. Certainly, you could argue that every decade is critical. But the difference between this decade and the past five decades is that we now understand our impact on this earth – even if there are many who refuse to believe it. We also know how we can live better, how to take care of the earth. The science is done. What remains to be seen is whether we can organize our lives in such a way that allows us to do what we need to do to sustain the Earth – and our civilization – into the future.

Are you ready to take your part in creating a new world?

If you’d like to help with the Australian bushfire relief effort, you will find resources on this page at 1 million women. (This page has been shared by many of my Australian friends – it’s legitimate site, with links to reputable groups who are trying to help those impacted by the fires.)

You can also donate to the San Diego Zoo’s Global Wildlife Conservancy. (This is where I have sent money).

If you’d like to better understand the psychological impact of climate change (which has mostly affected climate scientists up to this point, but is starting to become recognized in the larger population, there’s a good article at Mother Jones: It’s the end of the world as they know it.