How often do you lose track of what happened between leaving home and arriving somewhere else? Or, how often are you aware of the space that encompasses that moment between one year and the next? Or that space between breathing in and breathing out again? Today, I’m fascinated by those spaces in between, those spaces of transition. In part, that’s because I feel like I’m still in that space right now. That space between my journey with Homeward Bound in Antarctica and my gradual transition back to daily life in Colorado and my work as a professor.

I have so much to share with you over the next few weeks. In some ways, visiting Antarctica gives you a sense of what it must feel like to visit another planet. I have penguin and iceberg photos galore – stories of shipboard life, new friends and experiences, our work in understanding each other and ourselves. But every journey has those ‘in-between’ spaces at the beginning and at the end. It’s in that space where you shed something from your old life and take on something new – often, without fully being aware of what’s happening.

On our journey to Antarctica, the in-between space was occupied by the infamous Drake Passage, that body of water between Cape Horn, on the tip of South America, and the South Shetland Islands on the tip of the Antarctic Peninsula 500 miles (800 km) away. A strong ocean current moves from west to east through this narrow, deep passage (the average ocean depth here is about 2 miles!). Likewise, it sits right beneath the jet stream and storms move through regularly as they pass from the Pacific to the Atlantic, making this one of the roughest seas in the world.

The Drake is a moody, ancient beast, and you are at her mercy when you decide to cross her path. Previous Homeward Bound expeditions somehow managed to cross during very mild conditions – a.k.a ‘the Drake Lake’. We were not so lucky. 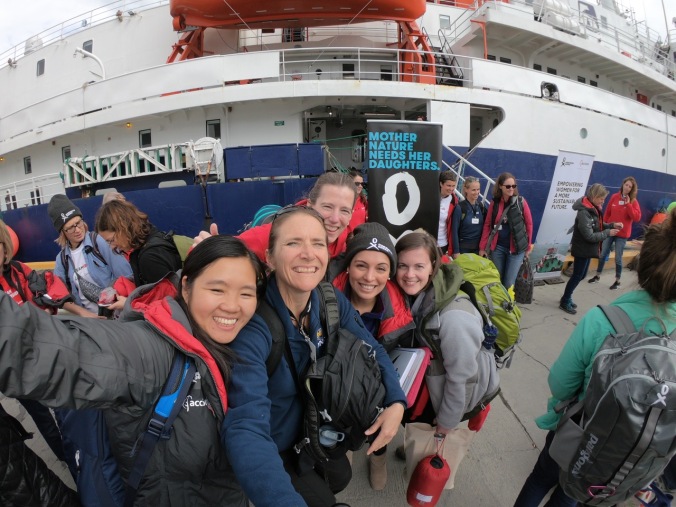 Getting ready to embark on the Ushuaia on December 31st with my first Homeward Bound learning group: Li, Colleen, Maria and Nicole. (If you’d like to read more about our adventures, check out Colleen’s blog, Summer in the South!)

We boarded the MV Ushuaia on New Year’s Eve with nervous anticipation. The weather in Ushuaia had turned cold and blustery on the short drive between the hotel and the dock. Despite our excitement as we cruised down the Beagle Channel, we wanted to get to bed early, before heading out to the open ocean and into the Drake. The forecast didn’t look too bad: 3-4 meter swells at most – that’s a lot calmer than it could be. But the captain told us that the direction of the swell meant that we would be pitching and rolling most of the way across the passage. Strong westerly winds would also make our progress slow.

And it was slow. The ship rocked side to side for two days, the whole way, and with it, I felt myself become slow. One of the first signs of sea sickness is sleepiness. I felt it shortly after dinner our first night and quickly popped a pill my doctor had given me for this sort of thing. But that’s when I entered a space of nearly 48 hours where I drifted in and out of consciousness. I thought I’d want to write – or listen to podcasts, or read, but I was never conscious enough for those activities.

Maybe it was the meds, but looking back, our first passage through the Drake feels like a dream to me. It’s dream where I was rocked to sleep each night, while imagining I was hanging from the branches of a large tree. During the day, I moved myself up to the ship’s lounge where I was told that I slept most of the time. I went to meals, but can’t tell you what I ate. I didn’t really feel like talking with anyone, but I couldn’t spend the whole day in my little bunk, the ceiling of my cabin only inches above my face while waves splashed against the little porthole to the side of my bed. And so, we passed New Year’s Day.

Everyone was out on deck to photograph our first iceberg after crossing the Drake.

We awoke on January 2nd to learn that the wind had slowed our progress and that we would not reach the South Shetland Islands until the evening. Another morning of pitching and rolling. But there was a shift by early afternoon, and at 4:38pm, a shout sent everyone running to the window – our first iceberg! Shortly afterward, we saw our first whales – and then PENGUINS! Arriving in Antarctica was like getting dumped in a pool of ice – invigorating and enlivening.

Our transition back through the Drake was a bit more of an adventure. On January 15th, four days before our scheduled arrival back in Ushuaia, we were informed that there were two storms headed toward the Drake that would interfere with our return journey. The plan was to make our last landing at Deception Island, in the South Shetland Islands on the morning of the 16th, then head out to sea and race across the Drake. That would put us in the path of the first storm, but we would hopefully outrun the stronger second storm.

Calm waters at Deception Island on the morning of January 16th – our last stop in Antarctica before heading back into the in-between time.

As we sailed away from Deception Island, the day was bright and sunny, but it wasn’t long before we encountered swells that sent our little ship rocking side to side again. We all sat in the ship’s lounge, in our last professional development session, working to piece together our strategy for approaching life over the next 100 days. But as the ship rocked side to side and the sun shone through the windows casting everything in a yellow light, I felt myself mentally checking out.

I tried to force my eyes open and fight off that sense of sleepiness that was beginning to cast its net over me. My logical brain tried to tell me that seasickness is in my head – I had taken a pill for that, anyway. When would that kick in? These swells were not any worse (yet) than what we experienced on the way south. But after two weeks of glassy – or at least, calm – waters along the Antarctic Peninsula, the swells were sending my brain into a tailspin.

Let’s just say that the rest of the afternoon passed unpleasantly. An attempt at lunch sent me up to my cabin, where I remained in bed until the following morning. (Note: Despite the best intentions of the chef, broccoli soup was not the most agreeable lunch option upon entering the Drake Passage!)

That space between noon on Jan 16th, until we anchored safely in the Beagle Channel on the morning of the 18th was like being on a roller coaster ride without seats or safety belts. There were periods of ‘calm’ (i.e., 3-4 meter waves), and periods of, well, let’s call it ‘excitement’. Through much of the afternoon and evening of the 17th, we sailed through the heart of the storm, with waves averaging 8 meters, and for a period of time, topping out at 12 meters. Fortunately, drugs made it possible for me to eat and be relatively comfortable with the pitching and rolling (except for a brief bit when I decided to visit the bridge – I learned that for me it’s best not to see the waves rolling over the front deck).

You can get an idea of what the view from the bridge was like through this video HERE. (Thanks to my HB3 teammate, Lesley Sefcik, for this video!)

Because I can’t show you what our whole ship looked like riding through the storm, I have to settle for this – from the penguin colony on Paulet Island. The penguins here have taken over an historical shelter constructed by sailors shipwrecked here in the early 1900’s.

What does an 8 meter wave do? It makes it a challenge to move about the ship. At dinner, we were not served any liquids, and it took a good deal of effort just to stay in our chairs and catch our silverware as it went flying across the table. What does an 11 or 12 meter wave do? One of those sent everything and everyone in our lounge toppling to the other side of the ship. Doors came off hinges. Chairs and people flew into hallways. Each large wave that slammed into us would send shudders through the hull of the ship, like an earthquake.

No one slept that night. Our expedition leader, Monika, recommended we tuck our life vests under one side of our mattresses in our beds – it creates a little cradle for your body, so you don’t rock quite as much. But it’s hard to keep your head from rolling back and forth. I laid there, not sleeping, not fully conscious, trying to determine the frequency of the waves by how much time it took to roll in the opposite direction. I wasn’t so successful at coming up with a number. (Try doing math on a roller coaster!)

Anchored safely in the Beagle Channel on our last night on the ship I saw the sun set for the first time in three weeks.

Of all the things I anticipated about this Homeward Bound expedition to Antarctica, of all the things that could have given me pause – isolation, no wifi, being on a ship full of new people, digging deep into my professional and personal development – the thought of crossing the Drake Passage gave me the greatest trepidation. I’ve always been prone to motion sickness, and even watching a video of a ship in stormy seas (much like the one I linked to above) would make me nauseous.  I was really surprised and happy to learn that I can survive something like that – not only that I can survive it, but that it can actually become one of the many fun memories about this journey (thanks, I admit, to modern medicine!) There were unpleasant moments, but I was able to ride them out.

Even if you’ve never been on a boat, I’m willing to bet that at some point, you’ve crossed the Drake Passage – your own transition to another world, another way of life. You’ve bobbed around in that in-between space. Sometimes those in-between spaces are calm and quiet. Sometimes the waters are dark and muddy and you get tossed more than you would like. You can fight it, or you can go with it and ride it out. Either way, you eventually reach the other side.

This the first time I had tried on my Homeward Bound jacket, just before setting sail from Ushuaia on New Year’s Eve – I felt geared up for adventure! Now, bring on the next one!

One thought on “Through the Drake Passage with Homeward Bound”