I think there are a lot of Gen-Xers like me who probably imagined growing up to live on the frontier of outer space. We were born in an era of space exploration and the flood of sci-fi movies and books into 70’s and 80’s culture fueled our fantasies. But at some point, not long after I started college, I realized that I’m deeply prone to motion sickness and have a low tolerance for very much time in confined spaces. Traveling and living in space was probably not the best life option. So I ended up on a ship to Antarctica instead. 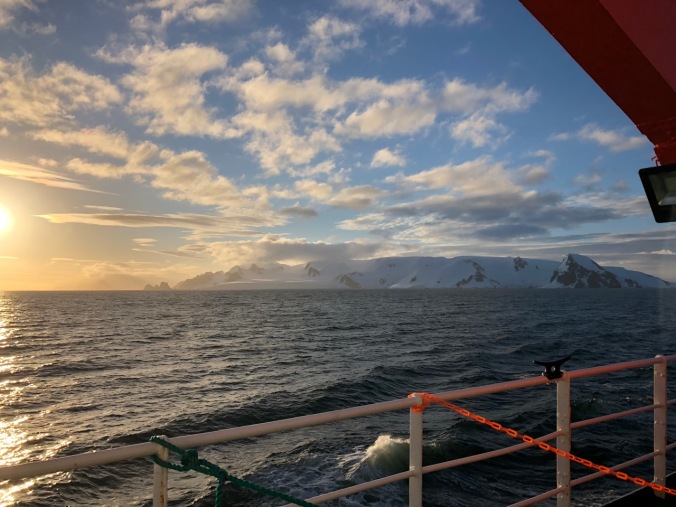 Arrival in the South Shetland Islands after the Drake Passage felt like landing on another planet.

One of the things that made space exploration attractive was the thought of doing something really different from everyone else. It was always clear to me that there were few geographical frontiers left on Earth.

Even on Antarctica, a place that does not easily support human life, 40 countries have established permanent, year-round stations. Some of these countries have multiple stations as well as a number of summer field camps. All told, each austral summer, there are nearly 4000 people living on Antarctica, not counting all of the adventures who aim to ski their way across the continent each year (there are even races across the continent).

Fair weather and calm water greeted us in the South Shetland Islands.

So, Antarctica is not unpopulated, but it is certainly sparsely populated. Consider: There are 4000 people in 5.4 million square miles, compared to three times that many in the space of half a square mile or so on the University of Northern Colorado campus. The remoteness and harshness of climate makes it one of the last pristine places on the planet. In that sense, visiting Antarctica is about as close as I’ll ever get to visiting ‘the frontier’ of space.

After the Drake Passage, it was such a treat to arrive in calm waters and see low-lying snow-topped hills in the distance. These were the South Shetland Islands, our entry point into Antarctica. Visits to two stations on King George Island gave us a glimpse into Antarctic life.

King George Island is the most heavily populated island along the Antarctic Peninsula. It doesn’t compete with McMurdo Station, on the other side of the continent, from what I hear, but with five countries that all have bases practically within walking distance of one another, it’s a veritable metropolis compared to other parts of Antarctica. (Wikipedia cites the population of the island at around 500. I’m guessing that’s a summer estimate, as numbers vary seasonally.)

We were so excited to visit the Chinese base, Great Wall Station, on a brilliantly sunny, warm, Antarctic day (by ‘warm’ I mean 43F or 6C). The visit was arranged by the Chinese Homeward Bound team, who served as our translators on our tour around the station. Apparently, we were the largest group of international women ever to visit the station at once.

The ‘No. 1’ building in the center of Great Wall Station was the first building at the base. Today it houses a museum and is listed as an official historic site in Antarctica.

From our landing site on the beach, our hosts led us across a barren, pebbly landscape, past an assortment of bright blue and red buildings that make up the station. These included community and sleeping quarters, laboratories and a weather station. The base also has a museum that tells the story of the establishment of the base in 1985 as China’s first Antarctic research station. 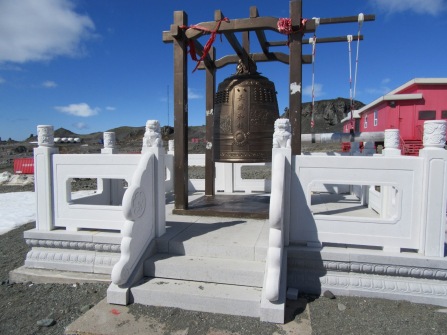 The bell at the heart of Great Wall Station.

One of the few freshwater ponds on King George Island. 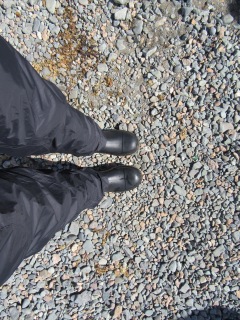 Our Chinese friends in Homeward Bound were thrilled and proud to be here, and so were we. On such a sunny day, it’s easy to get a feel for the landscape. The land around the station is low-lying, but ice-free.

Yaxin Yan and Binbin Wang – part of our Chinese Homeward Bound team who arranged our visit at Great Wall Station.

In some ways, this felt like a brief trip to China. But since I’ve been asked, I should clarify that Antarctica belongs to no one. The Antarctic Treaty, which has now been signed by 53 countries, protects the entire continent as a scientific preserve and states that the continent must be used for peaceful purposes only. It encourages international scientific collaboration, including the exchange of people, ideas, and results. Anyone who has visited Antarctica in considered an ‘Antarctican.’ Admittedly, that’s somewhat of a tongue-in-cheek expression, but the openness and friendliness of Antarcticans is, in many ways, a model for the rest of the world. There’s a climate of cooperation here that the rest of the world could learn from.

The Argentinian research station, Carlini, is situated in the same Antarctic ‘suburb’ as Great Wall Station. Both stations are on the west end of King George Island, but Carlini is about 10 miles to the east of Great Wall on what’s known as ‘Potter Cove’. Carlini was initially established as a refuge in the mid-1950’s, but upgraded to a base in the early 1980’s.

The base is composed of a cluster of red buildings at the foot of what looks like a big volcanic plug. The weather on the day we arrived was much more characteristic of summer weather along the Antarctic Peninsula: about 37F (2C), with a wintry mix (what we call a mix of rain, sleet and snow in Colorado).

The view of Base Carlini from our ship. While the base is ice-free, large chunks of ice had beached themselves along the shore.

Chunks of ice, the remnants of a frozen ocean, hugged the rocky beach along the shore. Fortunately, they didn’t interfere with our landing. Once onshore, we were led in groups through the science laboratory, where we had an opportunity to chat with some of the researchers about their projects. We also had a glimpse at some of the more unusual living quarters (see the red pods in the photo below), and we were invited to warm up in their dining hall (not unlike a Swiss chalet!) with tea and hot chocolate.

Homeward Bounders warming up with tea and hot chocolate at the Carlini dining hall. 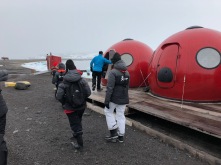 The chief science officer at Carlini tells us about the exciting work at the station.

As with Great Wall Station, I was excited to see the weather station. Our guide, Jose, mentioned that there is a clear warming signal in the local climatology (as there is all along the Antarctic Peninsula). He said that years ago, there would be snow on the ground all year, and that the rain-sleet mix that we experienced on the day of our visit used to be quite unusual.

Paola, one of our naturalists on the Ushuaia, and Jose, our guide, at the Carlini weather shelter.

Visiting Antarctica may feel like visiting another planet. It’s a harsh environment that is not very comfortable for us. But the fact is, unlike space frontiers (the Moon, Mars, and beyond) you will still find what you need to survive there. You will have plenty of water, fresh air, and, if you had to, rocks to build shelter, and plenty of penguins to eat. (I said: if you had to! Ernest Shackleton and his crew lived to tell their stories thanks to Antarctic penguins and seals!)

Humans are the most adaptable creatures the Earth has ever seen, thanks to our big brains. Sure, the dinosaurs roamed the earth for almost 200 million years – but there was not a single species of dinosaur that lived for that entire time, and, as far as we know, none of them made it to the moon. We have moved into every corner of our planet and have found a way to make it our own. That’s what we do as humans.

The problem is that we don’t ever fully understand the impact of making a place our own, and that’s the challenge we face in a warming world today. But we can learn, and we can adapt. Understanding our impact and the threat of climate change is at the heart of many research projects on the Antarctic frontier.

If we put our big brains and our hearts to work, there is even still a bit of time to turn on Earth’s thermostat and ensure that our climate remains sustainable for us. I see this as our only option – because living in space would be much more difficult. 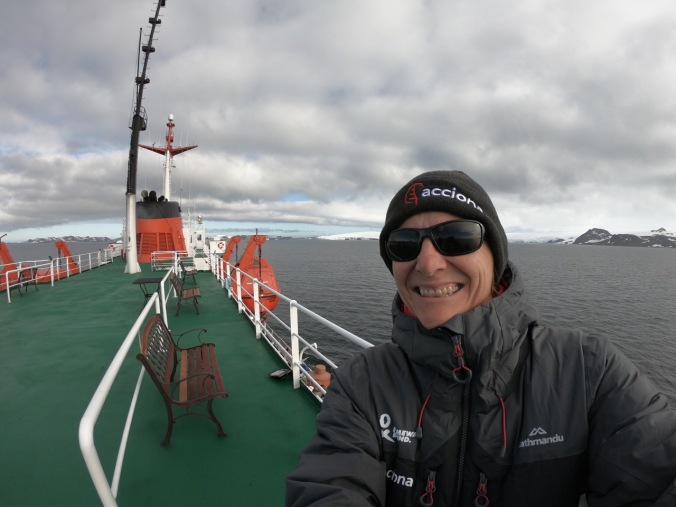 My first selfie along the Antarctic Frontier.