When I wake up to see tendrils of fog hanging from the streetlight, or rain-wet roads, I know we have arrived unequivocally in autumn. Apparently, September used to hold potential for the first snowfall as well, but that hasn’t happened in the past decade. These wetter mornings tend to punctuate strings of sunny blue autumn days – the kind of days that inspire you to plant bulbs and buy pumpkin-spice flavored things.

I had a longing to see the aspens this year. Leaf peeping is all the rage in September in the Rockies. In fact, it’s so much of a rage, that I have avoided going up into the mountains – especially into Rocky Mountain National Park – for years.

Anyone from the northeast will wonder what the big deal is. It’s just a bit of yellow, right? But if you hail from the West Coast, from a place where the leaves don’t really turn color, they just dry up in December and start budding out again in early February, the Rockies can be an autumnal Disneyland.

At the trailhead near Bear Lake. Maybe this part of the park is so popular because you can hit five lakes in a matter of a couple of hours (or just one or two, if you’d rather not be a hard-core hiker).

The Bear Lake area is one of my favorite places in the park. When I first moved to Colorado more than 10 years ago, I would go snow-shoeing here a couple of times every winter.

But now it’s everyone’s favorite place, any time of year. In fact, unless you get up really early in the morning, or get really lucky, you’re forced to park miles away and take a shuttle up to the lake. But I’ve been really hankering to visit this place again, and recently had the good excuse of a birthday on a sunny autumn weekday without classes or meetings.

The view from Many Parks Curve. The road up to the Alpine visitor center had closed only a couple days before.

I have to admit, I have a backlog of posts almost ready to go about summer hikes – several of them in Ecuador – but I really wanted to post these photos while it’s still leaf season.

Seriously, could you find a more beautiful autumn day in the park?

Bear Lake parking lot, at the end of a long, winding road, is a bit of a zoo – the place is packed and buses full of people from the overflow lot arrive every 15 minutes or so (yes – even on a week day!) I had hoped to get lucky in that parking lot, and come across a car that was just leaving. But instead, I found my luck in the Glacier Gorge parking lot about a mile down the road.

I love walking through ‘aspen tunnels.’

From Glacier Gorge, it’s a bit more than half a mile through the forest up to Bear Lake. Recent snow had flattened ferns along the sides of the trail, and while there were still patches of snow in shady spots, the trail, fortunately, wasn’t muddy. The trail from Bear Lake up to Nymph Lake (the first of the four lakes you can easily hike to), is actually paved to ease the movement of the hundreds and hundreds of people who pass through here each day. So this area is not a place that really warrants the use of your sturdy hiking boots.

Nymph Lake: In three months, this lake will look like a snowy meadow.

The Glacier Gorge trailhead is at 9240 feet, Bear Lake is at 9475 feet, and Emerald lake sits at 10,110 feet. So there’s some elevation gain, but having spent some time at much higher elevation in Ecuador last month, I think I’m no longer surprised by my body’s response to those high elevations. I know that I can truck along at a steady pace, as long as I keep it a bit slower than I would normally walk.

Aspens, snow-capped mountains, and beetle-kill – what else could you ask for? (Ok, maybe not the beetle-killed trees…But that’s all part of living with global warming.)

I think that this ability to pace myself – in all things – is one of the things I like most about getting older. On this day, as I passed along the aspen studded trail, I also found myself passing along another year in my 40-somethings. Birthdays can generally be ho-hum affairs, unless it takes you from one decade to the next (30, 40, 50, etc.). And my present age is about as ho-hum of a number as you can get. No new decade. No societal rites of passage, such as being able to vote, drink, or being eligible for retirement or Medicare. It’s one of those in-between ages. Some of my contemporaries have only recently had their last babies. Others are grandparents. It’s like the middle-aged version of the pre-teen years – but lasts much longer. 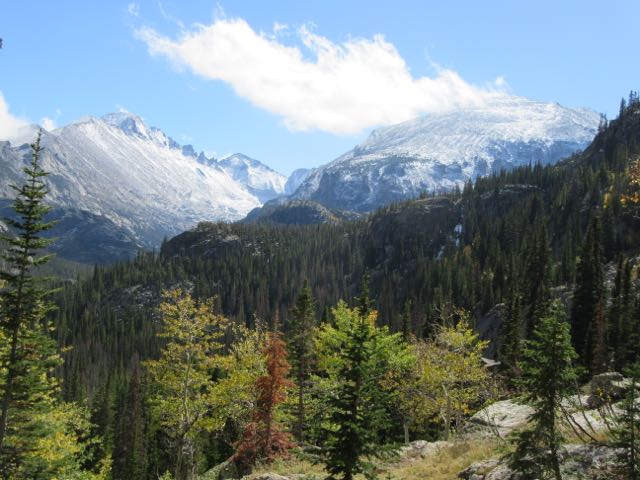 But while there may be a societal ho-hum about my present age, I find this time of my life to be anything but ho-hum. I’ve made a commitment to myself to celebrate every birthday, to clearly mark the passage from one year to the next and take note of my life before it’s gone. You only get so many opportunities for that. My mom had 71 birthdays. That’s it. And the last one really sucked because she was so sick. In fact, her two birthdays before that sucked as well because we were preparing for funerals. I’ve felt bad that her last three birthdays were so horrible. She was never too fond of her birthday, anyway. She didn’t really like turning older, and she often had to work – or got sick with something – on her birthday.

Near Dream Lake there was still snow on the ground from the past weekend.

I wish she had celebrated more when she had the chance. If you live long enough, there’s no avoiding the horrible stuff – and there’s nothing you can change about that. All the more urgency to celebrate those moments, those days, those years when things are going well, in those brief reprieves from the storm. That’s how you stock up enough resilience to get you through the next storm.

This might be the first time I’ve ever seen Emerald Lake before it’s frozen over…I can finally see the ’emerald’.

Emerald lake is nestled in a large cirque, dominated by Hallett Peak. Recent snow still clung to the shady spots on one side of the lake. There isn’t much space along the lakeshore – although, you could work your way around to the other side easily enough.

I stop here a few moments here to catch my breath and take in the view. A chipmunk surprises me by jumping on my thigh as I sit to take a picture. I wish I could stay here all day.

Hiking back down to Bear Lake, I envision doing this hike again on another birthday, perhaps many birthdays. I see myself doing this when I’m 80 – if I survive life’s many arrows (or stray bullets, our modern equivalent) long enough to live to 80. Living a long time involves a great deal of luck, and a small bit of taking care of yourself. I have no control over luck, as far as I know. But I can work on the other part.

There’s so much to do and see in this world. Passing through the upper 40-something’s, you feel the clock ticking in your bones and you start to see a few yellow leaves on the trees. There’s a sadness for the things and people long gone, but anticipation for autumn which always holds a new and different sort of energy. I think it’s going to be great.

With my hiking partner in the aspens.

One thought on “Leaf-peeping, Colorado style, and the hike to Emerald Lake”