(Alternative title: How I became a climate scientist). I’m back! After a long hiatus (also known as ‘spring semester’), I’m getting ready to publish a few posts that have been in the works for some time. This post, in fact, has probably been ‘in the works’ for more than 25 years.

I recently gave a talk to a group of faculty at my university. I was asked to speak about my work, but also share a bit about how I got into climate science in the first place. I started with this cover from Time Magazine – January 1989. 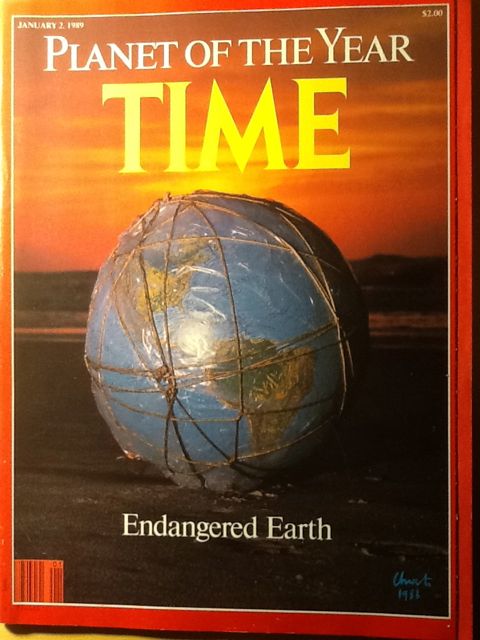 This was the magazine cover that changed my life.

I was always interested in science, but not necessarily climate. From a very young age, I knew I was living in the ‘Space Age’: a newspaper article about the lunar landing was prominently  displayed in our house, and in my grandmother’s guest room hung a framed photo of Earth taken from the moon. My grandmother told me that the astronauts sent it to her in response to a letter she wrote them about how proud she was of them. I would stare at that photo and dream about seeing Earth from space. (Actually, I think it was this exact photo below. It amazes me that it only took half a second to find this online.) 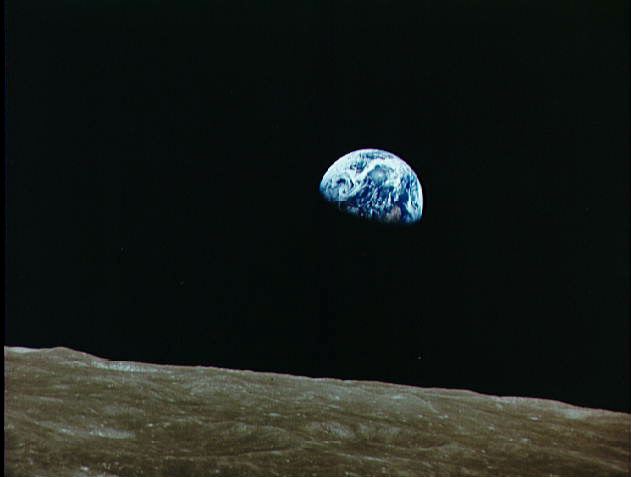 Earth rising on the moon. (NASA image from Apollo 8).

In the 3rd grade, as the Viking 1 lander was transmitting data back to Earth, I began to dream about going to Mars, and through the early 80’s, I avidly followed the Space Shuttle program. I was devastated by the Challenger disaster in 1986 – but still had dreams of seeing Earth from space – until it became very clear that, given my propensity for motion sickness and difficulty being in small spaces, space travel was not for me. (BTW – Any remaining inklings I had to visit Mars have been irrevocably squelched by the book/movie The Martian by Andy Weir).

A view of Mars from the first Viking lander (NASA image).

Living in the ‘space age’, I was excited about the future and what science could do for us. I had ideas that the future would look something like it did in The Jetsons, or in Disney’s Tomorrowland, or even Marty McFly’s version of 2015 in Back to the Future. In the future, we’d all be playing with cool techie toys, zipping around the countryside in silent computerized vehicles – maybe hoverboards – and talking to our friends on mini-computers that sit on our wrists. Food would be highly processed, dropping out of a machine – whatever we want to eat, whenever.

Yes, a lot of that actually came to pass.

If there was any darker possible future, that would be the one where the US and the USSR would finally get fed up with each other and Ronald Reagan, or someone who looked just like him, would press that red button in the Oval Office, and the nuclear holocaust would begin…Then we’d be living in some post-apocalyptic future, where I’d be a sword-wielding badass warrior stealing water and food from thugs so my clan could survive. (Of course, I would survive any catastrophe…that’s just how you think when you’re 14.)

I didn’t think too much about the environment. Growing up, I had the impression that ‘environmentalists’ were pot-smoking hippies, who staged massive anti-war protests and sang songs about love and Gaia. (Clearly, my parents were not out protesting the Vietnam War with them.) Environmentalism was, to me, some kind of strange religion. I didn’t see the connection with science, but how could I? We didn’t actually have science in our school curriculum until high school. I learned science from the books and magazines my mom bought me, from my brother’s cub scout book, and from my own outdoor explorations. I was a creature of the outdoors. I spent my childhood – much as I do my free time in adulthood – camping, climbing trees and rocks, sloshing through streams, digging in the dirt. I loved the natural world. Without realizing it, I had ‘environmental hippie’ roots built in at a young age.

The moment I became a climate scientist

So, this issue of Time Magazine, published in my impressionable first year of college, caught my attention. It tuned me in to entirely new possibility of the future – the one where we screw with Earth, and it’s just a matter of time before it bites back.

From the cover article:

“What would happen if nothing were done about the earth’s imperiled state?

According to computer projections, the accumulation of CO2 in the atmosphere could drive up the planet’s average temperature 3F to 9F by the middle of the next century. That could cause the oceans to rise by several feet, flooding coastal areas and ruining huge tracts of farmland through salinization. Changing weather patterns could make huge areas infertile or uninhabitable, touching off refugee movements unprecedented in history.” – T.A. Sancton, Time Magazine, January 2, 1989, p. 28.

When I read the article in 1989, the future it described sounded like that post-nuclear holocaust future I had envisioned. Although, not everyone would feel the impact right away. The article made it clear that impoverished nations would feel the effects first.

At the time that I read this article, the Cold War – and the threat of impending nuclear holocaust – was starting to fizzle out a bit. This new threat scared me more. Nuclear war was something that would involve a calculated political decision, whereas global warming sounded like a global accident resulting from general cluelessness and our lack of self-awareness as a species. It’s like the difference between choosing to punch someone in the face (and getting punched back because of it) and simply falling on your face because you tripped over your own feet.

Ultimately, this was my motivation for pursuing studies in meteorology, and eventually, climate science: to prevent a fall, you need to look down at your own feet, rather than out to space, and it helps to understand how to tie your shoelaces.

Today, when I read that Time magazine cover article, I get chills. It is horribly prophetic. We are indeed on a track toward a 3 degree warming by the middle of this century (we’ve already warmed about 1.4 deg F since 1880). There are parts of the world where people are forced to move daily – retreating from a rising tide (e.g. Bangladesh). And the refugee movement? If you think that what’s happening in Syria and beyond – this mass movement of people – has no connection to the long-term drought that plagues the region, I would love to hear another explanation that makes more sense.

(Don’t take my word on it – check out this article or this one. Note: I am ONLY sending you to peer-reviewed journal articles. You can find lots of articles written for the lay-person both supporting and discounting the whole drought-Syrian conflict connection. Many articles – on both viewpoints – tend to riddled with speculation and cherry-picked data. If you’re not going to take my word on it, don’t take theirs either. And if you don’t take anyone on their word, then you might just be a scientist!)

Predictions of global warming were a bit controversial in the late 80’s and early 90’s. My college professors were skeptical. All scientists are skeptical at first. That’s what scientists do. We are taught to doubt everything until we have proof. But what really kills me is that, here we are, more than 25 years later, loaded with proof that has ended ANY controversy in the scientific community, and there are still SO many people who refuse to believe this is happening!

Granted, things are changing. It’s getting harder and harder to deny global warming and not sound like someone who wears tin foil hats and talks to aliens. (Oops, I guess that’s still most of the elected Republican officials, as well as Republicans who are trying to get elected.) I’m beginning to understand that social change happens on generational time scales. Unfortunately, climate is now changing much faster than that.

It’s time to make Earth ‘Planet of the Year’ again. But a magazine cover is not enough. There are a lot of well-coordinated efforts these days to educate people about climate change. These are most successful with younger people – who understand that their future looks very different from the world they live in now. Most of them do not have an optimistic view. Many of them feel they’ve been left to deal with a problem that many older people still refuse to believe exists.

I like to think there’s hope. These kids, for example, are suing the federal government for causing climate change. That’s better than a cover story in Time magazine, in my opinion. They are acting on something more powerful than passive public awareness: Things that cost money force people to listen. We can’t afford another 25 years of stagnant progress on climate change action. There’s so much work ahead for all of us.