I was recently reminded how bears can turn ordinary people into a frantic band of smart-phone wielding paparazzi. Why are people so fascinated by bears? We imagine them as vicious killers (just google ‘Stephen Colbert’ and ‘bears’, and your will be reminded of how he often joked about them as ‘Godless killing machines’), but I think we also find them cute and cuddly. A bear with cubs at Yellowstone National Park will back up traffic for miles, as we discovered on a recent trip to the park.

Nature paparazzi, after the perfect shot of a small black bear along the side of the road.

People will leave their cars in the middle of the road, emergency lights flashing, tripods and cameras in hand, and RUN to a better view point. While people tend to keep the required distance of 100 yards from the bear, I think the road gives them a false sense of security. Surely, a bear won’t cross a road, will she?

Bears are the celebrities of Yellowstone. Any bear in site of a roadway will be swarmed (from a distance, of course). As Yogi Bear lamented, “Every day it’s the same old thing – Look at the bears! Look at the bears! Look at the bears!” Other animals have potential to jam up traffic for hours. Coyotes, wolves and moose are also A-list celebrities. But people will stop for bison, elk or antelope. Granted, there are times that the bison choke up the road as they herd their calves to another part of the park. But bison are a dime a dozen in some parts of the park, and it gets old stopping for every buffalo grazing on a hillside.

Trapped in a buffalo jam in Yellowstone.

But the wildlife aren’t the only park attractions that entice people to run. Old Faithful is still one of the most popular natural attractions in the US, up near the top of the list with the Grand Canyon and Niagara Falls. Every 90 minutes through the summer, from sunup to sundown, thousands of people gather on the quarter-mile long boardwalk and benches that surround the geyser. We hold our breath as the geyser bubbles and gurgles, and occasionally teases us with a fountain of water that rises up a few feet, then subsides again – until it decides it’s time to erupt in a shower that can rise up to the height of a 10 story building.

What’s clear from Yellowstone’s roving bands of nature paparazzi is that we still hunger for that connection with nature. We crave a glimpse of the wild – what remains of it, anyway. We yearn to be in awe of nature, and there’s simply not enough of that in our daily lives. After all, nature is food for our soul, as I’ve written before.

Once you shoulder your way past the swarm of cell phones, cameras and tripods, cars and motorcycles, Yellowstone is a bowl full of gems. Even in the Old Faithful geyser basin, there are some spectacular surprises. We happened to time a walk around the geyser basin with an eruption of Giant Geyser – only the second eruption of this geyser in 2018. You know it’s special when the rangers are running with their cell phones to take photos. 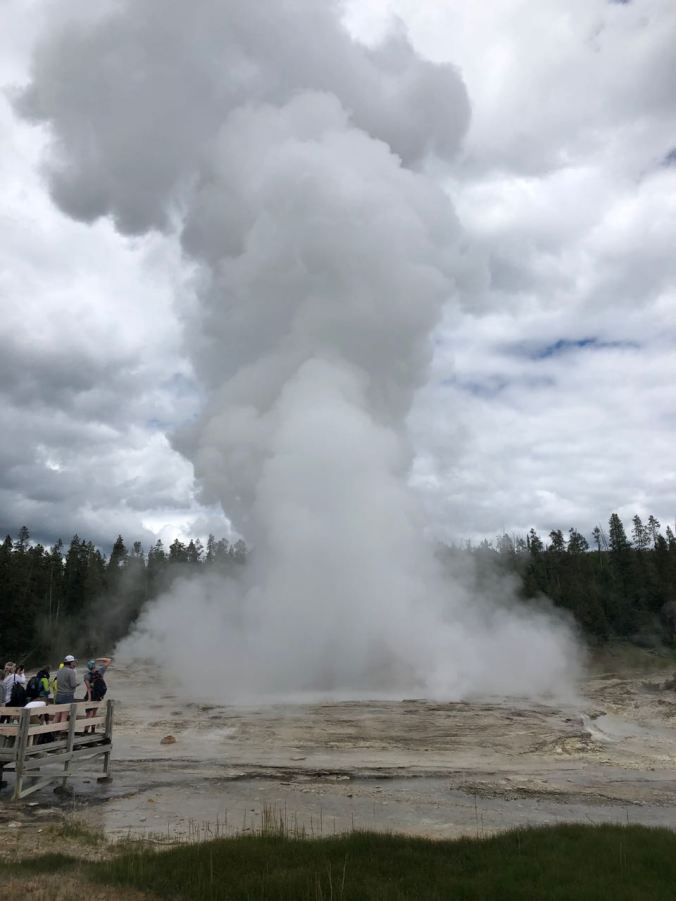 Our visit to the Old Faithful area was perfectly timed with a rare eruption of Giant Geyser.

Further north in the park, at Mammoth hot springs lets us travel back in time to a primordial Earth – a time where bacteria and thermoacidophiles (heat- and acid-loving microscopic creatures) ruled. Every year in my Paleoclimatology course, we try to imagine what the earth was like before people and plants. The red and yellow cliff face with bubbling, boiling pools and waterfalls is about the closest I can come to the Archean Eon, more than 2.8 billion years ago.

Mammoth Hot Springs gives us a glimpse back in time to the Archean (although, you have to mentally remove the dead trees to get a better picture of the world that long ago. Land plants didn’t emerge until about 400 million years ago.)

Some of you who are familiar with my work might remember that I did my doctoral dissertation on the climate of Earth 50 million years ago. During that time, central North America was covered with giant redwood forests. You can find a vestige of this ancient forest in the northeast part of the park. This single petrified Eocene redwood was a gem for me  – even though we had to pass about 50 bear paparazzi parked on a narrow road to get to it. This is one of those little spots in the park that seems often overlooked, tucked away, as it is, off the main road. It’s just the one tree, but a trail on the other side of the parking lot leads through forest, sage and meadow to a small, secluded lake, bordered by water lilies – ‘Lost Lake’, it’s called. A single bison was there to greet us at the lake. No paparazzi. 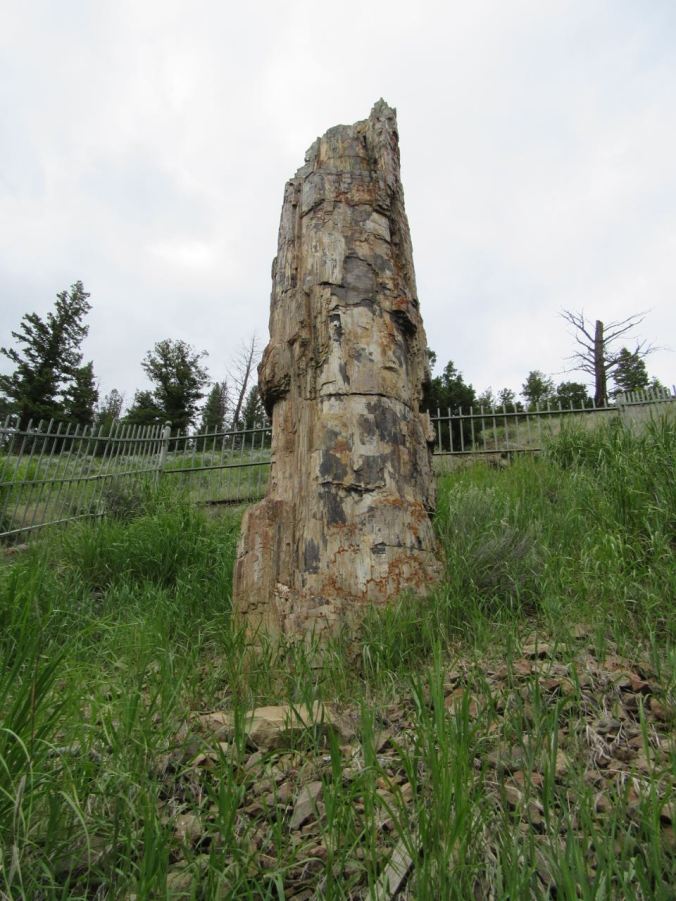 The last standing Eocene redwood in Yellowstone National Park (as far as we know).

I love the fact that Yellowstone has an abundance of short day hikes that give you a glimpse of the diversity of landscapes in the park. While volcanics shaped Yellowstone in the past, today, fire and climate change play a more active role in shaping the landscape.  In fact, most of the forest in the Yellowstone Caldera is less than 30 years old (following one of the largest fires in 1988). We hiked through an area of forest where thin, tall trees grow up right out of downed trees stacked four-deep.

A forest 30-years into recovery from fires at Ice Lake.

Yellowstone is presently experiencing warmer winters, less snowfall, and a longer growing season than it did 50 years ago (as we all are…hello, global warming), which means a longer fire season, and greater potential for ecosystem changes. The pine beetle, for example, is devastating the white bark pine – whose seeds are a critical food source for grizzly bears before they go into hibernation. If only climate change were the only threat facing bears. As you may have heard, the US Dept. of the Interior is lifting rules that prevented Alaskan hunters from baiting black bears with bacon and doughnuts on federal lands. Why? Because bears are evil, right? 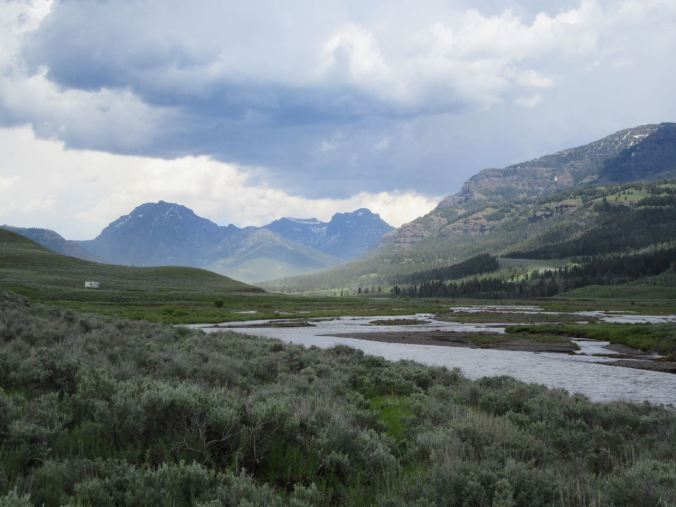 The wide-open landscape of the Lamar River Valley – the best place for Yellowstone wildlife-viewing.

The Lamar Valley, with it’s panoramic views and sage-dotted hill slopes took center stage on this trip, as we stayed just outside the relatively quiet northeast entrance of the park in Silver Gate, MT. As we drove through the valley to and from more well-known Yellowstone attractions each day, we got to see the landscape in changing light and sky conditions. A wet spring kept everything lush and green for our visit.

A short hike up from the road through the Lamar Valley sits Trout Lake. On a clear calm morning, this place is like Heaven.

In this era of anti-environmentalist sentiment in the US, it’s encouraging to see so many people who still love our National Parks (which are not suffering from crumbling infrastructure, as some politicians, including the POTUS, keen on privatizing for profit, might lead you to believe). These places deserve our taxes. National Parks are not only part of our national heritage, they are some of the few places where we can glimpse the earth with minimal human activity – particularly when you get more than 200 ft past a parking lot.

We are in the midst of a global environmental showdown. The cuts to land in Utah national monuments last December are symptoms of the backlash against environmentalism and the fight to bring climate change into the global consciousness. We’ve been lucky, in the US, to have such strict rules in our parks, and, until now, a government willing to enforce those rules. Relaxing the rules and opening up these places for profiteers and trophy hunters does irrevocable harm not only to the parks, but to our own future as a species. The US has been a global model for preserving natural wonders – but we are beginning to break at a most critical time. We are at a tipping point in global environmental change, and we need to protect these places – every inch of them – from those in power who are only out to protect their own interests (yes, I’m looking at you, Capitol Hill). Pay attention. Don’t let the bears distract you from the bigger picture. What’s at stake goes much deeper than food for our souls. 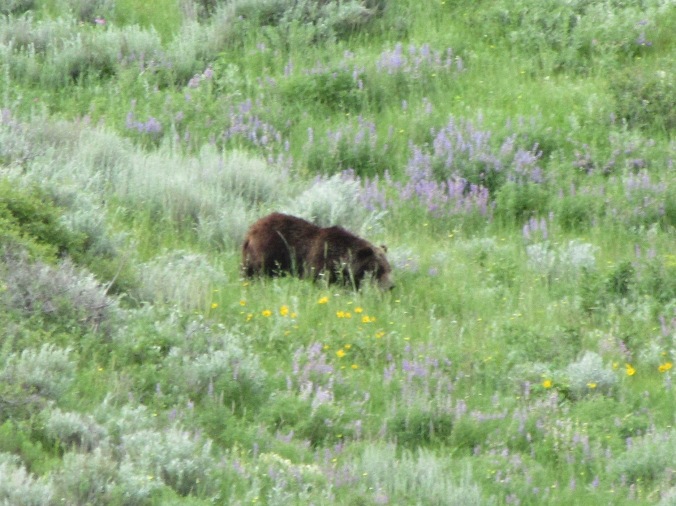 Best bear photo of the trip. And we weren’t in Yellowstone. This mama grizzly (and her two cubs) were on a hillside above the road northeast of Cody, Wyoming. We were the only bear paparazzi for miles.

BTW – If you’re irritated with me for ‘getting political’ in a post about a lovely national park, tell me, how can I not bring politics into this? Politics dictate how we organize our lives on this Earth that we share, how we care for our natural resources that help sustain our way of life. How we care for and use our national resources is inherently political. There is no way around it.