Maybe the moment that stands out most clearly in my mind, now, more than 25 years later, is the sunset on top the hill. In Western Ireland, sunlight lingers late in the evening in early July, then melts into a curtain of orange and red light that sinks slowly into the horizon (when it’s not raining). We had packed up tea and biscuits and grapes and took along the three, small, red-headed kids from our host family on the walk up the hill. Yellow light, bright red heads, and vivid emerald green carpet that stretched as far as the eye can see – that’s when I felt I was in Ireland. The photos, now yellowed with age, don’t do my memory justice.

That means it’s time to go back. 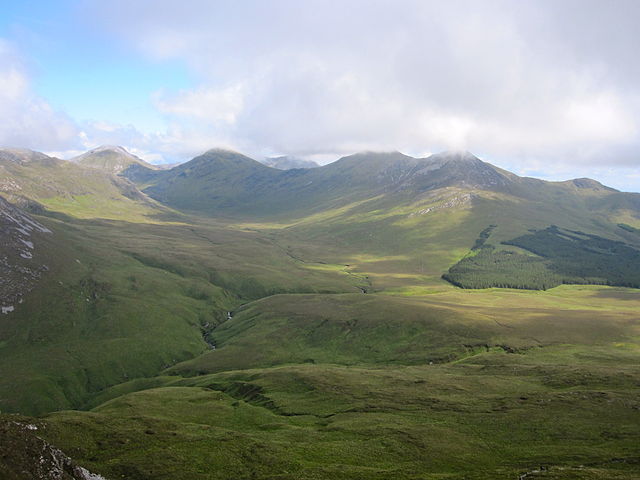 It was another lifetime, and many of the rest of my memories are vague and wispy. When I Google images of Connemara, it looks even brighter and greener than I remember it. I have to admit, I wasn’t entirely paying attention to the things that would capture my sights today. I was caught up in the social novelty of being away from home, with friends, in a foreign country for the first time in my life. I try so hard now to remember what it was like to travel at 19. I think there was something inside me that stirred awake on that trip – there was a passion for travel that was just beginning to unfold – and a dawning sense of global citizenship. I try to remember what woke me up to that, despite all the distractions of being 19. I hope to waken that sense in my students.

There are studies that show how international travel can spark areas of the brain which leads to new connections, insights, and creativity. Specifically, it seems to be cultural immersion that does the trick. Immersing yourself in a new way of life for awhile can help you forge a stronger sense of your own values and ways of thinking. It’s an ability to identify our own uniqueness in the context of someplace completely new. It also promotes a sense of allegiance that goes beyond national borders. Maybe this is what I want for my students – especially in this era of a rising nationalism that is incongruous with the needs of the world and incompatible with our sustainable growth as a species.

I’ve already posted about the grand plan to cycle around Ireland with my best friend Connie. During our first few days in Connemara, we immersed ourselves in Irish life with Connie’s family (not fully aware yet that our plans we’re already changing). We were fed hearty Irish fare with loads of homemade scones at tea time and fresh brown bread for breakfast, all with a steady stream of conversation that was so hard for me to follow in the lilting Gaelic accent.

On certain nights of the week, the regional pub at Maam Cross had a disco (i.e., nightclub – this was 1990, not the 70’s, for those of you already imagining flashy pantsuits with bell-bottoms). I can still see an old-looking white-washed pub at a crossroads, surrounded by bog and ben. For all I knew, it was the only place for miles. All the young people in Connemara would gather here and dance to new wave techno mixed with pop hits, the same music we heard on the radio back home. That music was an anchor – in a world without internet – it was the foundation for our shared global culture. There was an excitement in hearing something so well known in a place that felt so foreign to me, and so far away.

But maybe the moment that woke me up didn’t have so much to do with the culture as it did with the landscape. One night, early on, jet-lagged and unable to sleep,  I crawled out of bed and walked through a dark house into a room with a big picture window view of Lough Corrib. Moonlight beamed from the lake water, and everything was so still. I felt so far away from home and so enchanted at the same time. I could have been on another planet. But at the same time, I felt at home there. 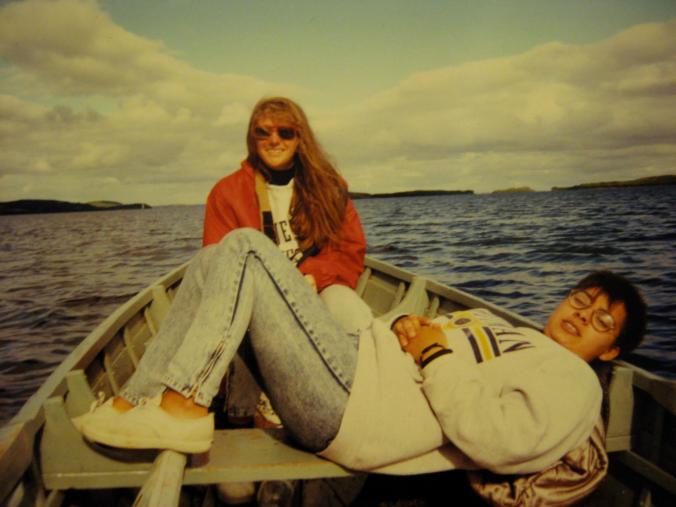 My best friend, Connie, and I on Lough Corrib, Connemara – sometime back in the 20th century.

I’m eager to see this landscape through a lens tinted by another lifetime of experience. I want to hike through green glens and glacial carved topography. I want to feel summer rain, followed by sun that comes and goes in a matter of minutes. I want to absorb some of that rugged wind-blown Irish coastline, and the stillness and silence that comes from hiking along a mossy creek. I want to eat buttery scones and brown bread, and remember the first time I experienced a sense of home in another place on earth.

The flights are booked. Stay tuned.

One thought on “Emerald Memories”