A couple of weeks ago the major outdoor retail chain, REI, announced that they would close their doors for Thanksgiving AND Black Friday, pay their employees, and encourage everyone to go out and enjoy the great outdoors. I think this is awesome, and I applaud this move. In fact, it makes me want to do all my Christmas shopping at REI, so maybe that was the point. But how many people really care?

Black Friday has almost become a bigger holiday than Thanksgiving. In some ways, it’s taking over Thanksgiving, as some stores opt to open with big sales on Thanksgiving day.

For my non-US friends: Black Friday is the biggest sales day of the year. Crowds of people stampede through malls and shopping centers to get to the best sales. It is a day fueled by a greedy commercialist culture – and, oddly, it comes on the heels of what is supposed to be our day of gratitude. Sometimes it overlaps with our day of gratitude – beginning at 6 pm on Thursday, people run to the doors of these stores, stomachs heavy with turkey, sweet potatoes and pumpkin pie.

This culture of consumerism is not at all a uniquely United Statesian phenomenon. It truly is everywhere. But I’m not sure it reaches such truly ridiculous proportions in other countries. (Although, apparently ‘Black Friday’ is now a thing in the UK – even without the whole Thanksgiving celebration to open up a weekend of mass consumer spending).

#OptOutside is a great antidote – but can this really take off? According to the Outdoor Foundation, “49.2 per cent of the US population participated in an outdoor activity at least once in 2013.” I know –  49.2% sounds like a fair number of people who get outside…But ‘at least once’?? That means that if you’re a couch potato, and you decide to go for a walk one day a year, and no other, you would count in that 49.2%. About 25% of that 49% participate in outdoor activities twice a week, according to that same report.

So this means that only about 12% of the US population really spends time outdoors. (And if you go out for a walk twice a week, you count among this minority). Maybe these are all the people who shop at REI, and will applaud their resolve to close on Black Friday, like I do.

But this is what I find a little depressing. So few people really spend time outdoors. That’s depressing because being outside is how you connect with the environment – it’s how you develop an intuitive sense for changes in weather and the seasons, how you get an internal sense for gradual shifts in climate and an appreciation for the changes – even if you don’t follow it up (or precede it) by looking up weather and climate data online, like the geekiest of us do.

Again, this is not unique to the US. I often think about a long conversation I had last summer with Carolina and Rocio, the lovely ladies who run the inn I visited high in the Central Sierra of Ecuador, at Posada de las Nubes. The Posada is a place where you can spend days just watching shadows dart across the mountain sides, and you can feed your soul on the sights of unusual flowers and butterflies. The inn is a restored adobe hacienda, with wood-plank floors, brick and mud walls, and bamboo beams in the ceilings. At night the wind would blow through the gaps between the windows and the walls and sounds like waves crashing on a beach. 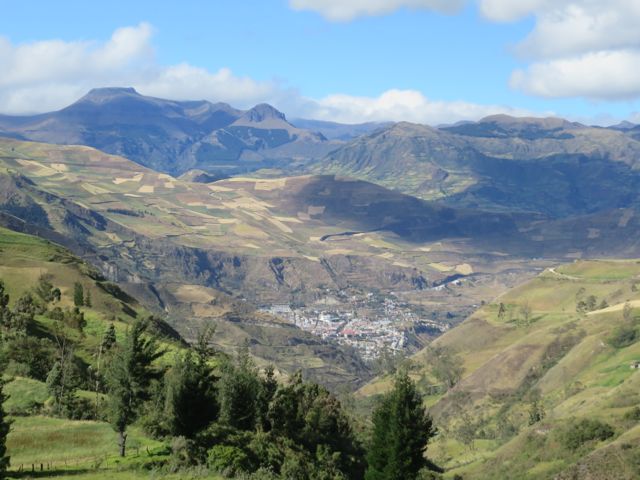 A view of the Ecuadorian mountain town of Alausí, from Posada de las Nubes. This region of Ecuador has suffered the greatest deforestation in the country. But people need to eat.

Carolina and Rocio have created a place that blends seamlessly with nature. The bright colors inside – orange and lime-green and sky blue – highlight Carolina’s artwork, along with the old furniture and photos, and really make the place feel like home. The electricity was out for most of my visit, thanks to a downslope windstorm, and as I was the only guest, Carolina and Rocio sat around the candlelit hearth with me in the evening to keep me company.

(If it sounds like I’m waxing poetic, that’s because this was one of my favorite places in Ecuador).

Posada de las Nubes, in the Central Sierra of Ecuador.

Our conversation about their efforts to restore native forest on their property turned toward a discussion about attitudes of people toward nature in general, and why more people aren’t worried about the state of the environment. On one level, you have the people in their mountainside community who depend on nature for their survival. These people do not have money or cars, in general, and their primary goal is the betterment of life for themselves and their children. If that means cutting down the native vegetation for more farming space, so be it.

On the other hand, there are the rich people (or richer people) with time, money, and energy to get outdoors, but don’t do it. There are lots of reasons for this – but as I Rocio, Carolina, and I hypothesized, this his to do with the fact that consumerism has invaded so much of our lives with the advent of this digital world we live in. People just want to improve their lives, but what that means is a very complicated thing. What does that mean when you have most everything you need to be comfortable? It’s hard to break out of the mindset that abundance is better. Of course, many people don’t have what they need to be comfortable, and desperation makes being outdoors a low priority. But for those who do have enough, it’s hard to think into the long-range future, and what this material ‘abundance’ might mean for the natural world.

All of our material purchases require an extraction from somewhere in the natural world. And this is at the heart of environmental degradation and anthropogenic climate change. In the end, consumerism and sustainability are not compatible. There will be an end to this culture of consumerism – it may well be long after my time on Earth has ended – but the world can’t sustain this.

At the same time, I fully realize that I’m a part of all this. I buy things new. And I try to recycle the old, but many things aren’t created for recycling. I know I would be shocked to see the space that the rubbish from my life activities have taken up in a landfill. (In the US, we each generate somewhere on the order of 90,000 pounds of trash in our lifetimes.) But I’m a product of this culture, and it’s hard to continue to live in this world without consuming. (Short of dropping everything, moving to rural Alaska to become a hermit and live off the land – some people try that, and it doesn’t always go so well for them).

So I will do little things where I can. That means supporting #OptOutside (even if our high temp on Friday here in Colorado is below 20F) – and instead, find a way of putting my money where it makes a difference in the quality of people’s lives.

On a park bench in Fort Collins, along the Poudre River.

BTW – for little things you can do to reduce your personal impact on the environment, check out cotap.org.

One thought on “Transform Black Friday into Opt-Outdoors-Day – who’s on board?”