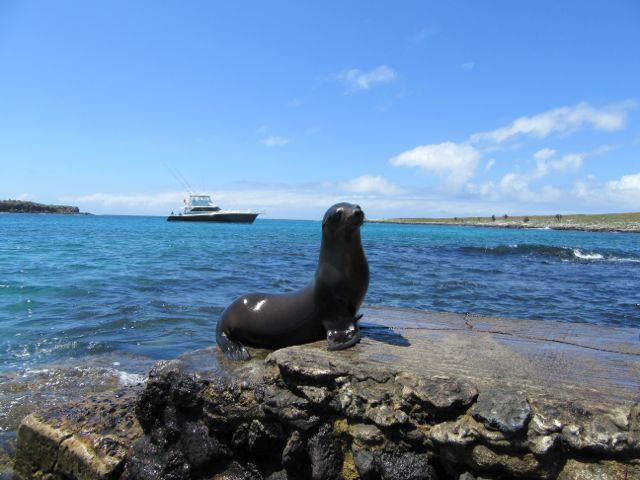 A juvenile sea lion awaits us on the dock of South Plaza’s Island, a small islet near the larger Isla Santa Cruz.

The Galapagos will always appear in shades of blue in my mind. While the drier island landscapes are painted in red and orange, or draped by lush, low forest canopies of green and yellow, those are simply accents against a pale blue sky, and deeper blue ocean. As the world here in the Northern Hemisphere gradually turns gold and red with autumn and a new school year is ramping up (well, ok, it’s been ramping up, and at this point, is going full speed ahead), I wanted to share one last set of Galapagos photos – shades of blue, some lush green forests, and quirky animals. Warm thoughts  and images to carry us through frigid days ahead (those of us who are winter-bound, anyway!) 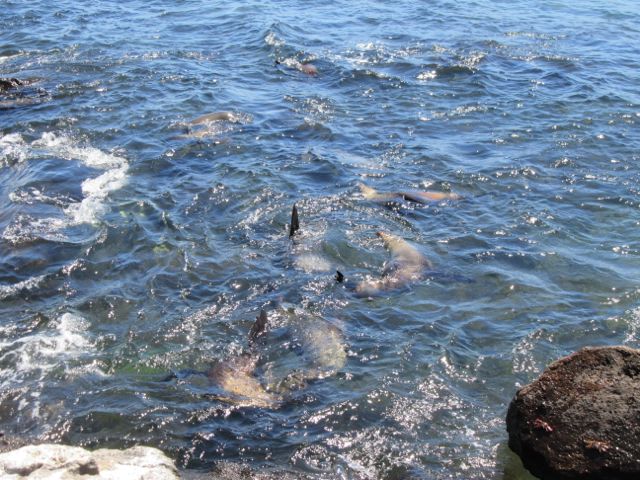 Our last two days on the Galapagos brought some close encounters with marine creates and time to explore our home base on Isla Santa Cruz. A day trip to South Plazas Island, on the east side of Isla Santa Cruz gave us an opportunity to visit a sea lion breeding colony, along with some alien landscapes, haunted by roaming iguanas. 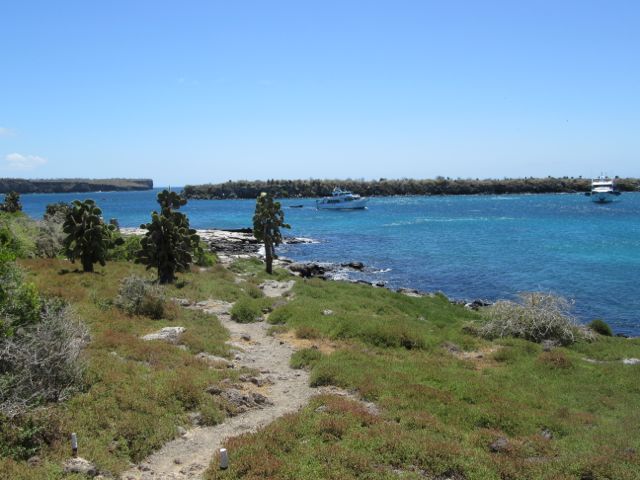 The channel between North and South Plazas Islands.

South Plazas is a long narrow island, less than a quarter of a mile wide. The north side slopes down into the channel that divides North and South Plazas and provides a good anchor spot for tour boats. The south side of the island has been carved into steep cliffs from the onslaught of northward moving swells.

One of the many land iguanas roaming South Plazas Island.

In the sheltered channel, dozens of sea lion pups spend their days learning to swim and fish. There is  dominant male sea lion, affectionately named ‘The Harbor Master’, who patrols the waters every so often, poking his head up to investigate visitors and shout a quick warning bark before diving under and swimming off again. The other male sea lions hang out on rocky promontories on the south side of the island, sunning themselves on volcanic rocks, well above the waves.

The south side of South Plazas Island. If you look carefully, you’ll see a sea lion at the top of the cliff.

On Isla Santa Cruz we visited an orchard that has become famous for the giant tortoises that hang out there.

Apparently, after people began inhabiting the Galapagos, the giant tortoises discovered that guavas and bananas were much tastier than leaves and grass, so many of the tortoises on Santa Cruz now pass their time at this orchard. When they get hungry, they plow into a banana tree (like a tank) to knock it over, then have a feast on fallen bananas. 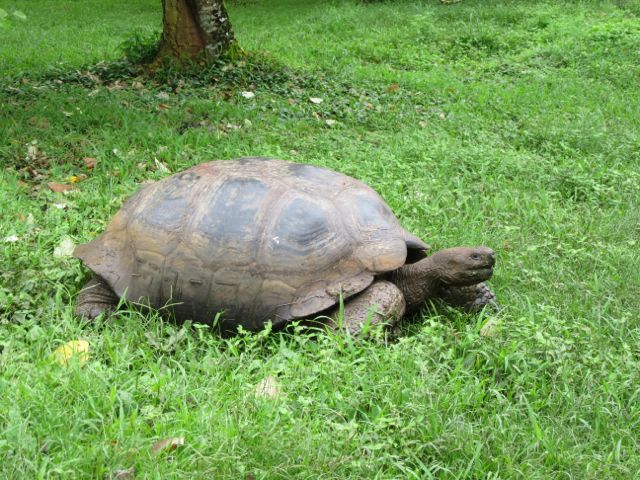 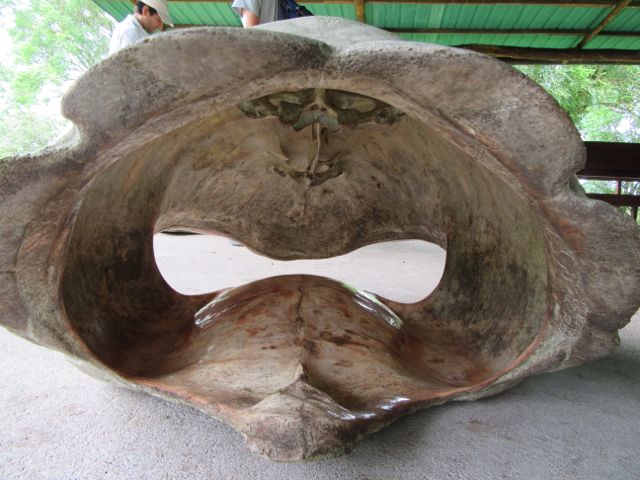 Tortoise shell at El Chato. Shortly before we arrived at the reserve, some lady crawled inside that thing for a photo op. They were trying to get her out when we arrived.

Tortoises bathing in the mud.

One of the twin craters in the highlands of Isla Santa Cruz.

Up the road from El Chato, the tortoise ranch, are the famous twin volcanic craters of Isla Santa Cruz, Los Gemelos. My personal geology expert tells me they are more likely collapsed lava lakes or tunnels, rather than ‘craters’ – but the crater story works well enough for most people. 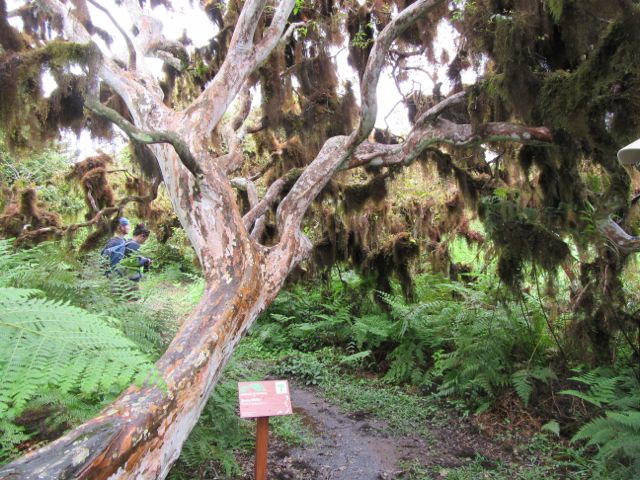 Some of the fantastic vegetation in the Santa Cruz highlands, on the edge of Los Gemelos, the twin so-called-craters.

A little way outside of the village of Puerto Ayora on Isla Santa Cruz lies one of the most famous beaches in the Galapagos – Tortuga Bay. The beach is part of Galapagos National Park and you can only get there via a ~35 minute hike along a nicely paved trail – or a water taxi from Puerto Ayora. 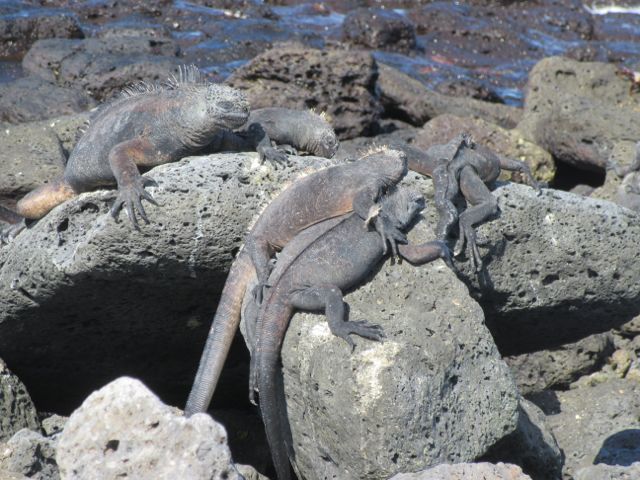 One of the most interesting sights at Tortuga Bay (although, there isn’t a single vista at Tortuga that isn’t amazing or interesting) is the thriving community of marine iguanas that hang out on a promontory at the end of the bay. They’re a bit hard to see from a distance, given that they’re the same color as the rocks, but, like most Galapagos creatures, they don’t really mind visitors, as long as you don’t stand in the way of their sunshine. 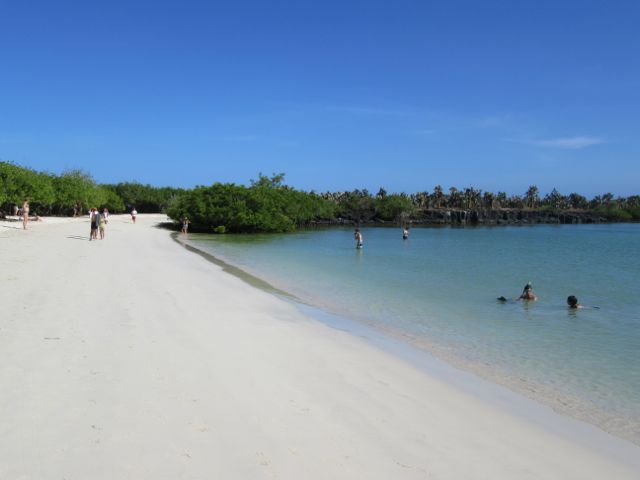 Visiting the Galapagos was a lifetime dream for me. On the day we arrived, as we crossed Isla Baltra from the airport on the ferry, I practically had to pinch myself. This is the stuff of legend for a scientist. The center of the theory of evolution. Not to mention a tropical paradise.

But the fact is, like everywhere on this Earth, the Galapagos have been heavily impacted by humans – the entire ecosystem has been irrevocably altered from it’s pre-human state. While the wildlife on these islands are famous for having evolved in isolation, the fact remains that they are no longer isolated. The survival of many species actually depends on our attention and efforts to protect what’s left. In some cases, as with the Galapagos penguins, we can’t do anything. The penguin population takes a big hit every time there’s an El Niño. Warmer waters and increased frequency of El Niño over the past 20 years or so have taken a toll. We were told that the next big El Niño (happening RIGHT NOW) would probably kill them off. These penguins are too sensitive and finicky to raise in captivity.

I hope this wasn’t a once-in-a-lifetime trip. I’d like to go back. But even if I do, I know I won’t be visiting the same place. Whatever efforts are underway to protect the wildlife and the islands, there are changes occurring that are now beyond our control. I will probably never see a Galapagos penguin. And that makes me me another shade of blue.

3 thoughts on “Galapagos Part 3: Every shade of blue”