Sunrise over the Bombuscaro River in Southern Ecuador. Situated on the eastern foothills of the Andes, this is one of Ecuador’s biodiversity hotspots.

The clouds here hang in thick patches on the sides of the hills. Sometimes they seem to rise right out of the trees, forming only a few feet above the canopy as water vapor from this steamy forest becomes too much for the air to handle. If my trip to Alausí gave me the impression of going back in time, my visit to the Bombuscaro River valley on the northern border of Parque Nacional Podocarpus took me even further back. Let’s just say that it wouldn’t have been much of a surprise to see a dinosaur come crashing through the underbrush.

Chachalacas – making sure the coast is clear before moving in on some banana.

Although, I don’t have to try too hard to imagine dinosaurs. Their modern descendants flit about in the canopy. As I sit at breakfast at the Ecolodge Copalinga, hummingbirds dart in and out of the dining area, sometimes zipping past my head, only inches away. Occasionally one stops a few feet in front of my face to check me out. I watch larger birds with crazy names stopping to feed on bananas laid out by the staff at the lodge. A family of chachalacas – mother, father, and three little ones – come by nearly every day. 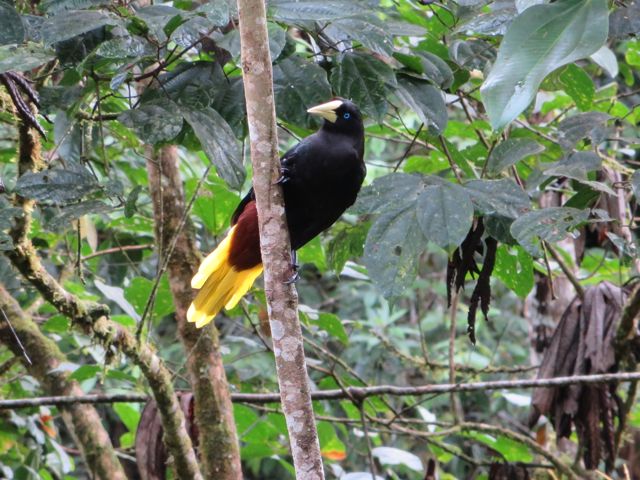 The crested oropendola, hope for a chance to sweep in on some food.

As the chachalacas feed, a crested oropendola watches on, waiting for an opportunity to sweep in on some banana. He also comes by every day, but I never actually see him eat. Sometimes he just hops about making his loud gurgling-honking call. 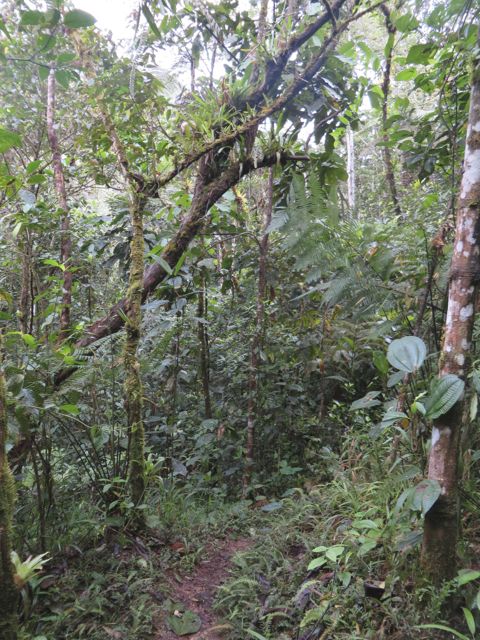 A trail through the forest at Copalinga.

I’ve written a lot about the absence of native forest in Ecuador – but Podocarpus is one of the places where it still exists. Not only does it exist, but it thrives here in the moisture of the Andean foothills.  The national park covers a broad area of lower montane rainforest. You can reach it by a ~4 hour drive south of Cuenca (6-7 hours in bus), east of the city of Loja. While the park was created in 1982, in the mid-1990’s, it was recognized as a biodiversity hotspot – especially for moths and for birds. 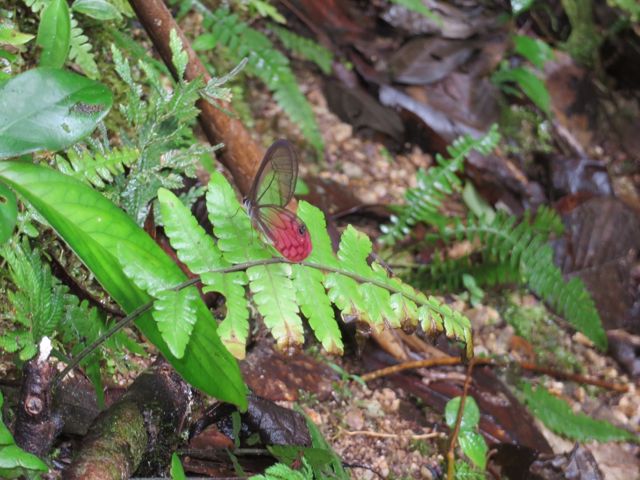 A rose-colored Cytharia (a ‘glass-wing’ butterfly) on the forest floor.

My launching point for visiting Podocarpus park and the Bombuscaro River that runs through the park, was the small town of Zamora, nestled in a valley at the confluence of two rivers. The ecolodge Copalinga is about 3km from town, along the dirt road heading toward the park entrance.

Along one of the trails at Copalinga.

Copalinga is a fairly large, family-owned, property with an extensive trail system that borders the park (you can read more about it on their website). They are famous among birders for the tinamou – a shy bird related to the ostrich (but much smaller!) that lives in the Amazon undergrowth. Each afternoon they set out a little food on one of the trails to coax it out of the forest. Although, this bird doesn’t really need coaxing. I followed the lodge owner, Catherine, up the trail, and found that the birds were waiting for her on the other side of the blind they had set up for these feedings.

Tinamous nibbling on corn at Copalinga.

My lodging at Copalinga consisted of a comfy little cabin in the woods. I loved listening to the sounds of the forest each night – and, I have to admit, there was quite a bit of rain. Copalinga receives about 200 cm of rain each year (about 79 inches!), with the rainiest months in March through June. Arriving just at the tail end of the rainy season, the rainforest did not disappoint.

Catherine has kept daily records of weather for a number of years. This location, on the eastern Andean foothills, receives most of its moisture directly from the Amazon. But the mountains seem to have an influence as well, and depending on the direction of the wind, the air can be cooler and drier, or warmer and more moist. Catherine told me that, at times, it’s as though the air masses from the Amazon compete with the mountain air above. The winds become quite strong and gusty. She says they call it ‘Clash of the Titans.’ While I was there, it was generally humid and quite warm during the day (low to mid 80’s), but cool enough for a jacket at night. 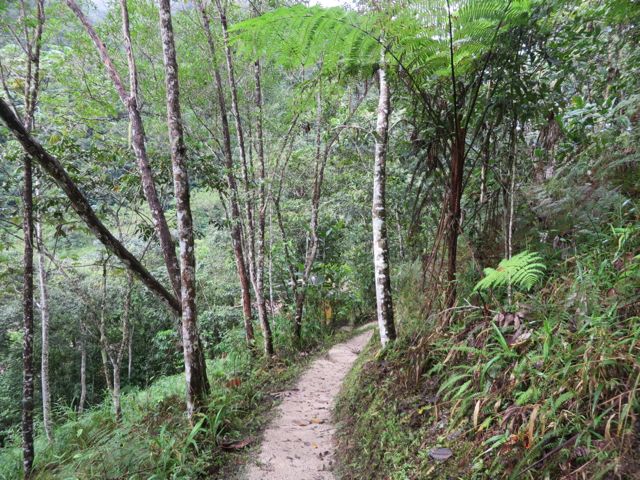 I spent my three days there hiking the trails at Copalinga and in the national park. There aren’t too many places in the world that you can access this easily and feel completely surrounded by plant life. There are so many things to look at in a forest like this – as I walked along, I passed bubbling creeks, stepped under moss-covered branches, and flushed out butterflies from the sides of the trails. 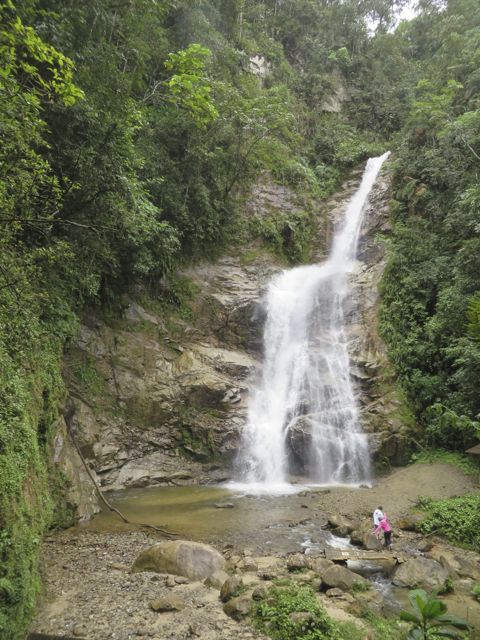 About a 30 minute walk from the ranger station at Podocarpus is on of the biggest attractions in this part of the park – La Cascada Poderosa (direct translation: Powerful Waterfall). This is a famous swimming spot – and that would have been fun if I hadn’t already been wet from the rain. As you can see from the photo above, it was packed with people (yes – this was the busiest place in the park, with about 3 visitors all arriving at once).

Trail through the enchanted forest.

At Copalinga, I really enjoyed hiking up one of their longest trails to the highest point on the property. It amazes me how an added 500 m (~1600 ft) of elevation can affect the type and distribution of plants. At one point, I found myself walking along a long ridge – still surrounded by vegetation, but with occasional views to either side of the ridge. Thick, springy mosses and ferns lined the trail, and the whole picture inspired the title of this post. I was reminded of stories about gnomes and fairies living in enchanted forests.

Leaves this big make you feel like Alice in Wonderland.

A fern, just beginning to unfurl itself. 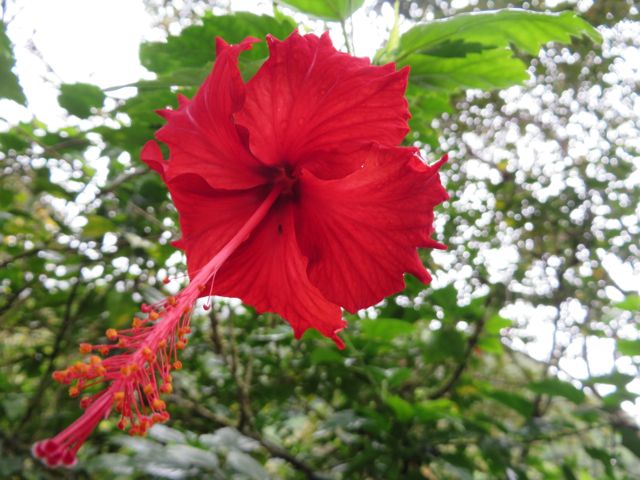 The salmon-lined white butterfly who finally sat still enough for me to take a photo.

I have to admit, I was rather proud of myself for making it up the trail to the highest point. All told, the round-trip was only 3-4 miles (~5 km), but with a 1600 ft climb (and subsequent descent!) in air so humid it sometimes feels hard to breath for someone who normally lives in a near-desert. It was more than worth the effort!

The view from the highest point at Copalinga, close to 500m above the lodge, on a hill looking toward Podocarpus National Park. I wouldn’t have been surprised to see a Pterodactyl fly by. 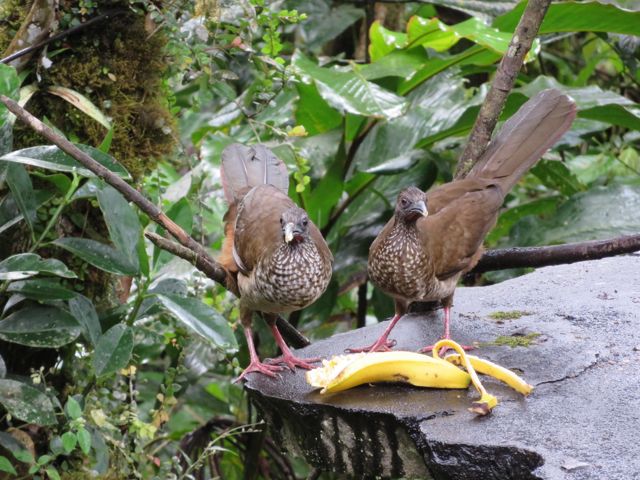 Unfortunately, with this trip to the forest came the demise of my trusted camera. It functioned well enough to help me take all of the shots in this post, but died immediately on return to Cuenca. I suppose after 5 months in Ecuador, it had all it could take. There will be a another camera coming from the States next week, along with a traveling companion, then we are off to the Galapagos – the last big adventure before heading home!

3 thoughts on “Venturing into the Enchanted Forest of Podocarpus”