As I begin to count down the days to an as-of-yet-unspecified day of departure (still waiting for my plane ticket), and I try to rally my strength to get through the cold weather and build my enthusiasm for traveling again, I realize that I have never really shared what made me apply for a Fulbright to work in Ecuador in the first place. Why am I about to pack up my life into a big purple suitcase and move to this tiny South American country for 6 months? 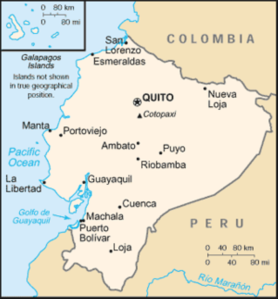 Map of Ecuador – I’ll be calling Cuenca ‘home’ for 6 months. (Source: US Dept of State website)

Surprisingly, I don’t get the question ‘Why Ecuador?’ all that often. A lot of people, I think, don’t quite know where it is. I’ve had people confuse Ecuador with Ethiopia. Uh, wrong continent. Some people confuse it with Peru (more understandable – Peru is just to the south of Ecuador and they have some shared history).

Most everyone has heard of the Galapagos, however. For a long time, that was Ecuador’s shining jewel and primary tourist attraction. For the people who don’t know Ecuador, that’s how I introduce it to them: It’s the country with the Galapagos.

But more and more people are now looking to Ecuador’s mainland – the mountains, the cloud forests, the Amazon – as a major vacation destination, and, for some in the US and Europe, a retirement home.

So what, specifically, drew me to apply for a Fulbright there?

Cuenca is a city of ~300,000 people at ~8000 feet elevation (not the palm-laden beach community, nor even the small mountain pueblo most people imagine I’m going to visit). This is a city with shopping malls, theaters, universities, museums, a concert hall – everything you might imagine in a modern city. And it has history. It’s listed as a UNESCO World Heritage site.

By all accounts (and I’ve been reading lots of them from travel and expat bloggers) this city is oozing with charm (and, apparently, fantastic bakeries). It’s a major travel destination in Ecuador – a major destination for learning Spanish, and a major expat hang-out.

I didn’t set out to do a Fulbright here. But it was the Ecuadorian Fulbright Commission that suggested it and put me in contact with people I might work with there. I had been looking at institutions in Quito and Guayaquil. But, academically, la Universidad de Cuenca turned out to be a better fit.

One thought on “So … Why Ecuador?”