Near the southern tip of Iceland, a great arm of ice stretches across a mossy, gnarled landscape toward the sea. It writhes down the mountain at a snails pace, from it’s home at Myrdalsjökull, the cap of ice atop a sleeping volcanic monster. 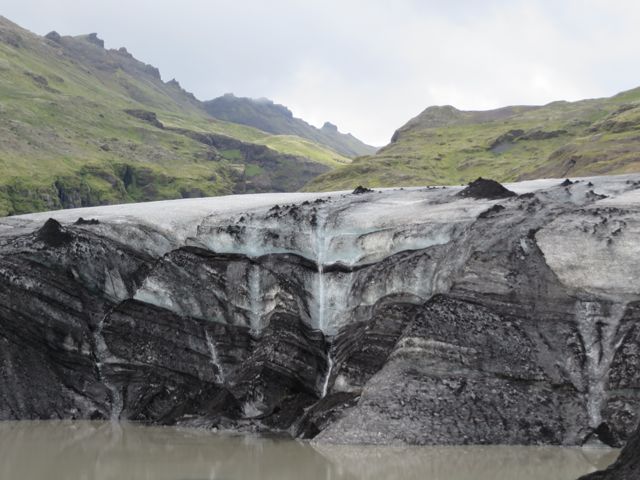 At the foot of Sólheimajökull, near the southern tip of Iceland, June 2013.

Sólheimajökull, as this land-terminating glacier is known, stops about four miles short of the coastline. Near the summer solstice, the foot of Sólheimajökull is a tangled mass of muddy ice and gray water. Rivulets of water carve canyons in the mud and ice in a matter of hours. Walking along the ephemeral ice sculptures that dot the narrow band of earth bordering the ice cliffs and the glacial lake, you feel like a hobbit, poking at a dragon. 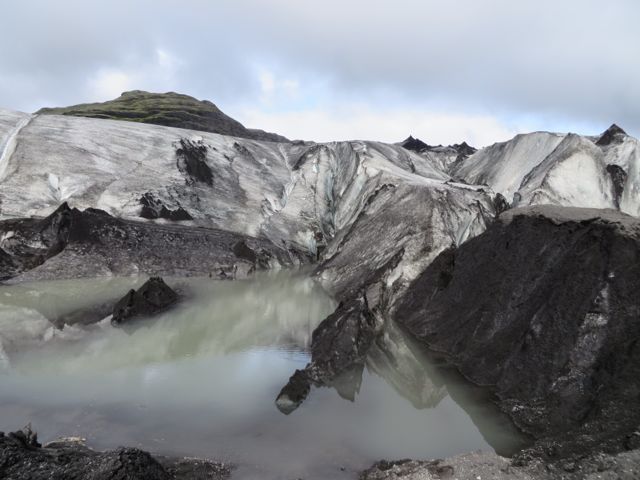 But this is one sickly dragon. Year by year, Sólheimajökull disappears, further into the mountain. My visit to Sólheimajökull in June 2013 was my first visit to such a massive glacier. Everything from the rugged cliffs and blue-tinted caverns of ice to the elaborate patterns braided in fine silt at the edges of glacial ponds left me in awe.

As I reluctantly hiked back to the car after exploring this enchanting land of ice and mud, I came across a hand-scrawled sign supported by a pile of small boulders, about half a mile from the base of the glacier. It clearly indicated that this was the position of the foot of the glacier only 3 years earlier, back in 2010. 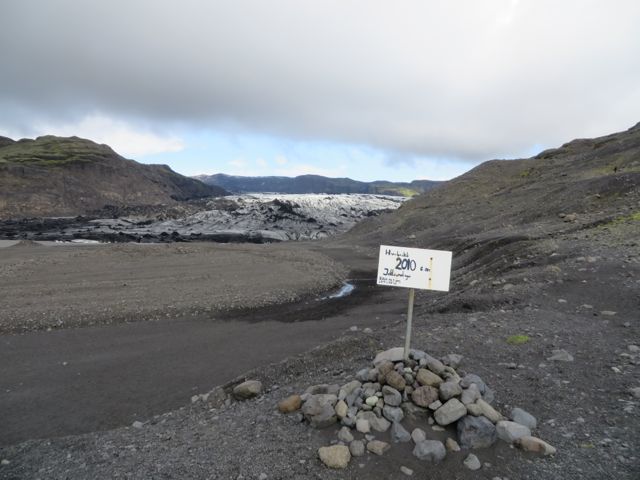 A sign at Sólheimajökull showing the extent of the glacier in 2010.

I felt that creeping sense of disappointment I had when I visited the Great Barrier Reef nearly 20 years ago and learned how silt from rainforest destruction and aggressive farming was choking off the reef. Certainly, reefs and glaciers are very dynamic entities. In the larger scope of geologic time, their presence on Earth is not much longer than our own.

But when I’m not thinking like a geologist, I view the world like everyone else, through the lens of human-time, and seeing how quickly change can occur in the natural world is startling. Changes that we once thought occurred on the order of centuries to millennia (based on what we’ve seen in the geologic record) can happen in years to decades. To think that glaciers are changing at the rapid pace of humanity, rather than the pace of any orbital or natural cycle is humbling. This is the face of climate change in the 21st century.