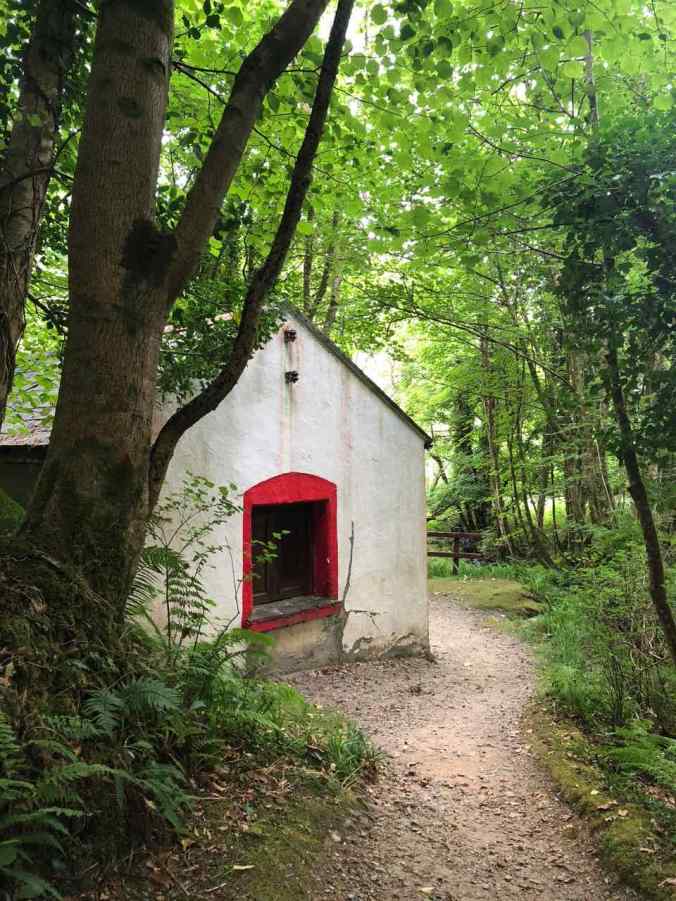 I followed a mossy, fern-lined forest trail that wound around a bend, and I stumbled upon this little place. It felt like something I’d find in a fairy-tale and I was surprised not to see fresh-baked scones cooling in the window. But this place has been closed up for awhile. I think it used to be the visitor’s center for Connemara National Park in western Ireland. Now, a white-washed, newer, larger visitor’s center sits a five-minute walk through the forest and up a steep hill.

I love any landscape that takes me far away from suburban sprawl.  I long to see stark, lonely mountains beneath wide-open skies and I want to ramble through dense green forests in search of fairy-rings. That is what you find in the heart of Connemara. Only an hour or so from the city of Galway, this part of Ireland feels rugged and remote, but makes for easy day trips. Decades ago, this was the first place I visited in Ireland, on a college summer break, and I was eager to see it again, through wiser eyes – and with the freedom of a rental car (rather than a bicycle).

This past July, we spent four days near the town of Letterfrack, the gateway to Connemara National Park on the Atlantic coast in western Ireland. This place feels remote, made more so by the narrow roads and pastures dotted by sheep. I loved it. Our mission was to to experience as much of the Irish outdoors as we possibly could in two weeks – until rain clogged our pours and soaked our socks! (Turns out, this wasn’t much of an issue thanks to an Irish drought).

I get the sense that Irish hiking culture is a bit of a new thing, Most trails we hiked in Ireland didn’t really feel like ‘trails’ – they were gravel-lain, occasionally tarred, one-lane roads, and not always clearly marked as trails. We sometimes found ourselves wondering if we we had strayed off the ‘trail’ onto a busy rural road, a forest maintenance road, or someone’s driveway. We knew we couldn’t get too lost, wherever we strayed. It’s not the Amazon. And there would inevitably be a pub, an old cottage, or a friendly farmer to chat with wherever we found ourselves.

If you love hiking, and find yourself in this part of Ireland, give any of the following three walks a try.

The hike up Diamond Hill

Connemara National Park (CNP) is not that big. Coming from Colorado, it felt quite small. There are really only three hiking trails, the longest of which loops over the summit of Diamond Hill. You could imagine the trails at CNP making a large figure 8. The lower part of the 8 is a wide, gently-rising gravel or raised-wood path along bog and grassland. This lower loop could be done in half an hour, if you’re quick.

There’s nice spot to stop where two loops of the 8 cross paths. It overlooks Ballynakill Harbor and Tully Mountain to the northwest. The upper loop of the 8 is where you get your workout in! 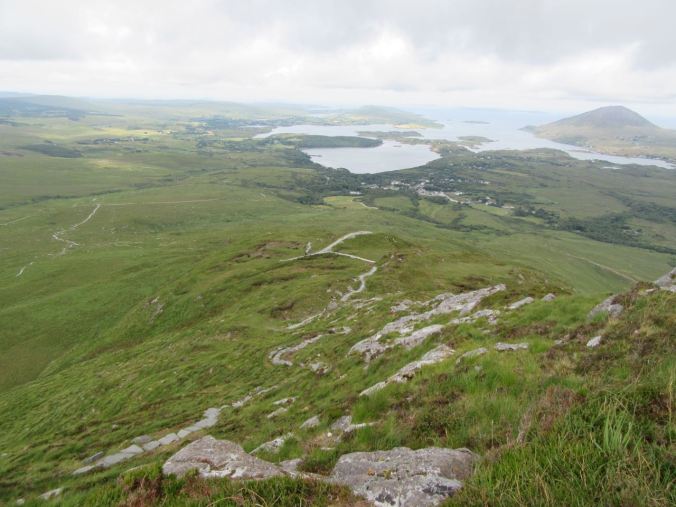 At Connemara National Park looking back toward the village of Letterfrack, Ballynakill Harbor, Tully Mountain (the hill in the upper right), and the winding trail up Diamond Hill.

The trail narrows and rises quickly up the side of Diamond Hill, along stones that have been laid out as stairs. On the day we visited, there was a low cloud base just above the peak of the hill, and it felt like we were climbing right up into the clouds. The stones were slippery enough that I wouldn’t have wanted to do this in the rain. As it was, a stiff southeast wind carried enough mist for me to want to put on my rain jacket. (This still counts as a dry day in Connemara!) 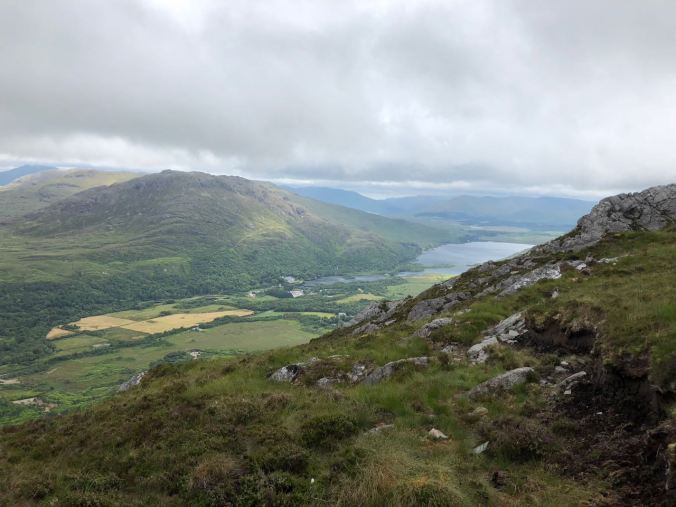 Looking down from the summit of Diamond Hill toward Kylemore Abbey.

Your reward for hiking up about 60 flights of stairs (according to my iPhone, anyway – about 400m, or 1300 ft – which is taller than the Empire State Building or the Eiffel Tower), is a view to the northeast, and Kylemore Lake, home to one of Ireland’s most famous tourist attractions, Kylemore Abbey. 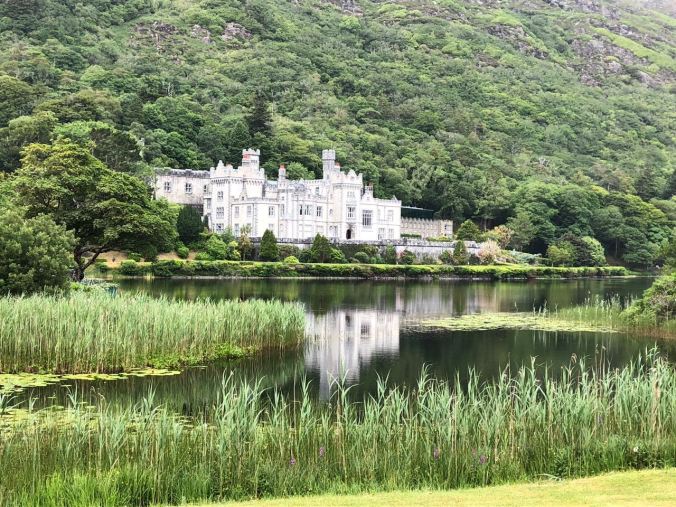 Postcard-perfect view of Kylemore Abbey. I think I took this exact same photo on my first trip to Ireland. To get much closer, you need to pay an entrance fee of about 13 Euros.

On my hike back down the mountain, the mist rolled in on the wind, and I found myself deep in a cloud that hugged the trail. Sometimes, travel takes you out of time. It gives you a glimpse of the world that existed long ago –  even if it’s just in the shadows of your mind. As I wound my way down the hill, I could almost see the shadows of all the people who walked these same paths, the same mountain, in nearly the same weather. I imagined how many people trekked across these grassy slopes in the rain, before the trail existed, to gather sheep or visit a neighboring farm. I tried to imagine this place thousands of years ago, untouched forest burgeoning on these slopes during the retreat of the last Ice Age.

About 10 miles east of Connemara National Park sits Killary Harbour. Often described as Ireland’s only real fjord, Killary Harbour is a long, glacial carved inlet nestled between towering mountains on either side. The long trail on the south side of the harbor is known as the Killary Harbour Coast Walk, or the Famine Trail. 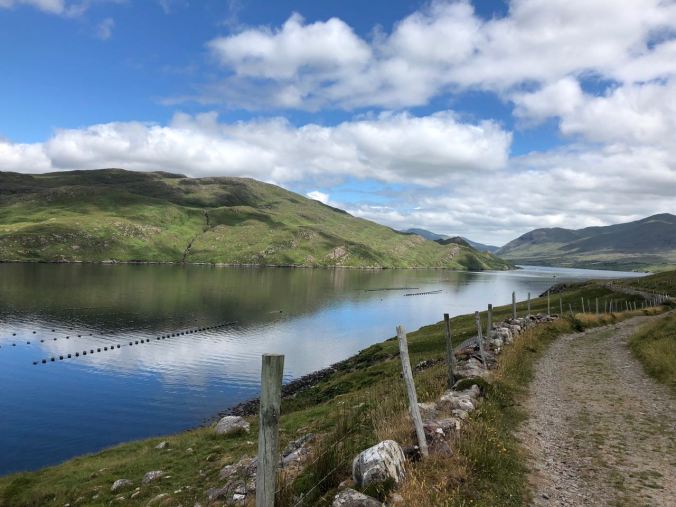 The ‘Famine Road’ along Killary Harbour winds past oyster and mussel farms.

During the Irish Potato Famine in the 1840’s, Irish peasants were employed to build roads in exchange for food. Apparently, it didn’t matter whether or not a road was actually needed. Anyone who didn’t work wouldn’t get fed. The scars from this era take the form of single-lane country roads that criss-cross the countryside in Western Ireland – but don’t actually go anywhere. They make for some good hiking trails these days. 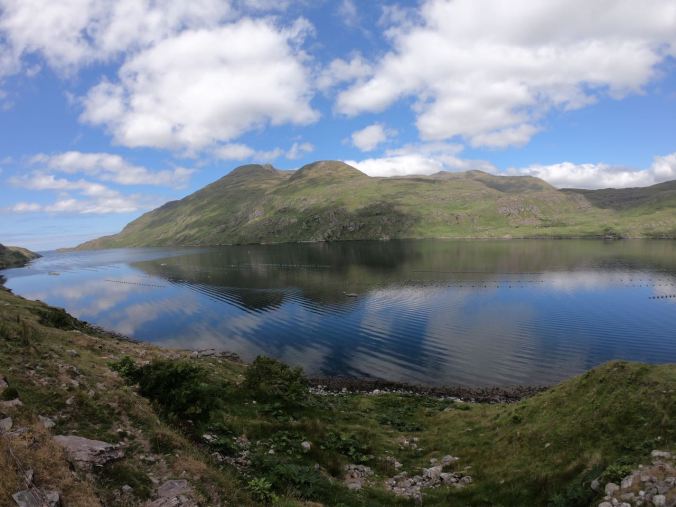 As with most of our Irish hiking experiences, the directions I found online were not easy to follow! Here’s my best attempt to describe the start of the hike: park on the N59, about seven miles west of the village of Leenane, near the sign pointing to the Killary Sheep Farm, and the sign pointing toward Bunowen Road. These two roads head to the north – facing north, start walking along the one to the right. For a couple of miles, you will walk a paved road past sheep farms, and then along the harbor.

Eventually, once you pass an oyster farm, the road becomes all gravel, and goes about 5 miles out to the end of the harbor. We only walked about half that distance. On calm, sunny days, the water is like rippled glass, reflecting rugged and green mountains. It was hard for me to believe I was at sea-level. I’ve witnessed similar landscapes in the high Andes, above 12,000 feet. 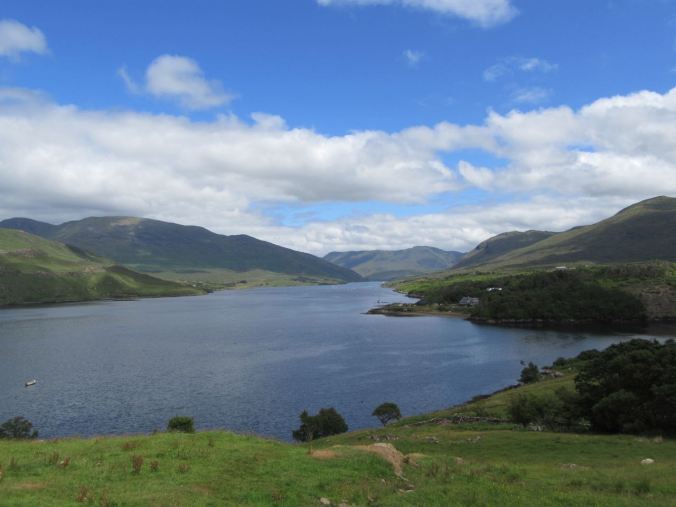 Looking inland toward the village of Leenane along Killary Harbour.

In timing a visit with old friends in the village of Cornamona in eastern Connemara, we discovered a lesser known gem on the shores of Lough Mask. The Clonbur Wood was once part of a large estate. Today, a network of trails through this mixed woodland that let you wander between the villages of Cong and Clonbur through groves of beech, ash, hazel, birch and pine, along rocky lake shores, limestone pavements, and past the ruins of the estate. 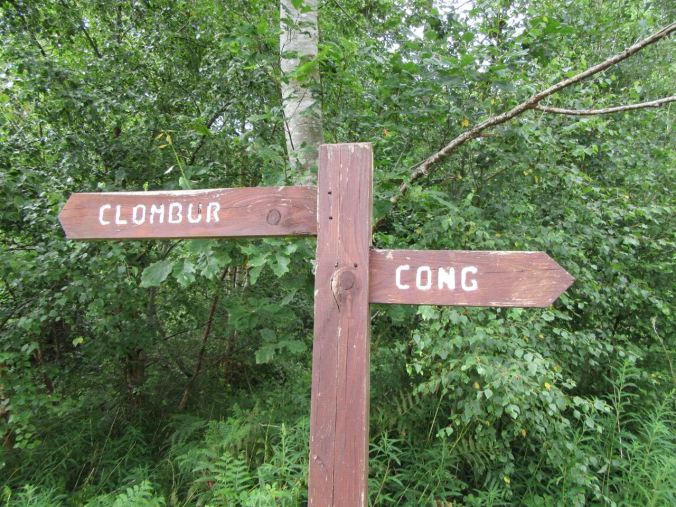 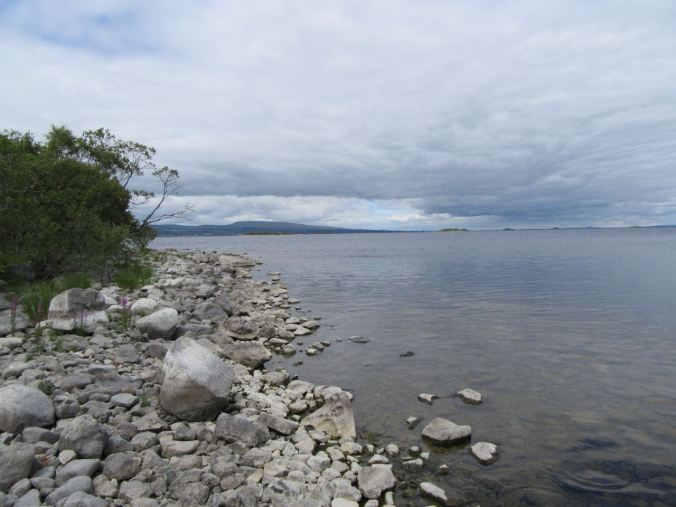 The rocky shores of Lough Mask.

The day we walked through the Clonbur wood, it was warm and muggy at 70+F. The woods are carpeted with ferns and moss, Along the trail, you pass groves of nettles and raspberry bushes then through shady, dark passages, where the tree branches criss-cross above your head. Flies buzz and butterflies flit among tall purple flowers that poke their heads up above the shrubs. I found myself imagining poets walking through these woods, inspired to write about the buzz of warm summer days. 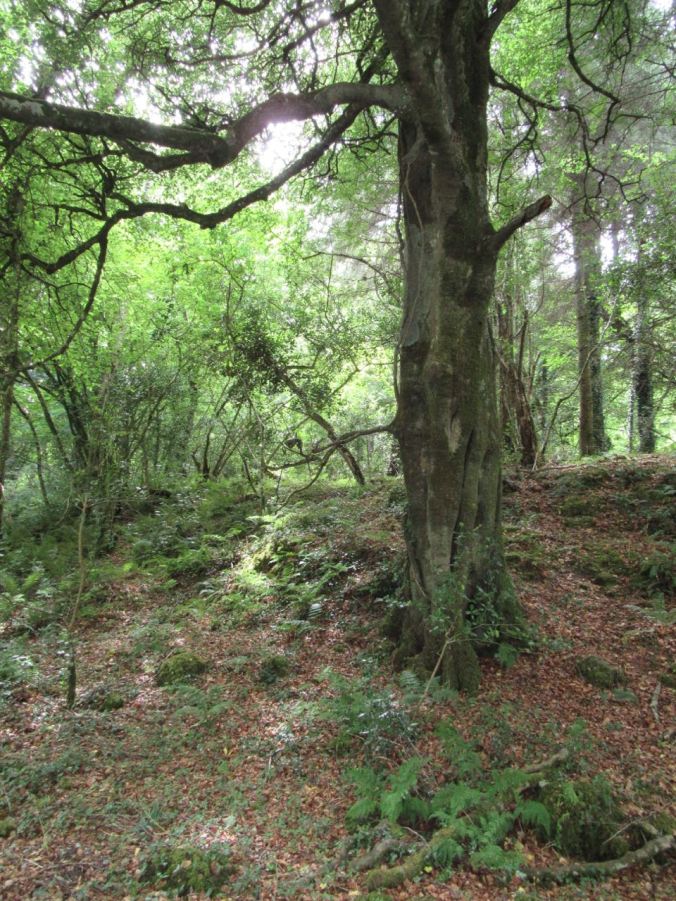 I also imagined fairies, right out of Midsummer Night’s Dream, zipping about in the dark shadows and dancing on moss-covered stumps. We came across a pot-marked limestone pavement, polished long ago by massive glaciers. Large swaths of it jut out like fingers into Lough Mask, and also cross the trail. 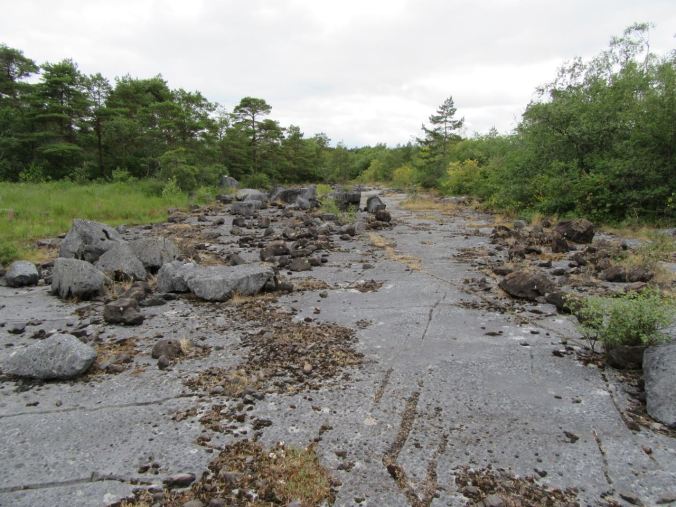 Limestone pavement stretching across the trail at Clonbur Wood Park.

There was only time to explore a small part of these woods, despite hiking at least 6 or 7 miles. I could go back, and spend days wandering through the forest. 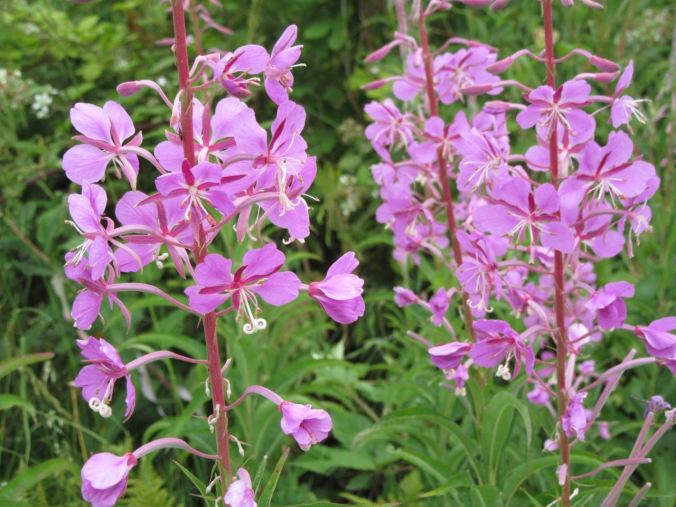 In college, we spent a whole class period in one of my English classes discussing Yeats’ poem The Lake Isle of Innisfree. With decades gone by, there are very few discussions I remember from my college English classes – but for some reason, that poem stuck with me. I hadn’t yet traveled to Ireland, and I think that poem epitomized what I expected Ireland to be. I was not disappointed when I arrived in Connemara and found that it was not far off from my expectations. While Ireland has changed in the past few decades (it’s hard to avoid freeways, the internet, and let’s face it, drought, in the 21st century), I was happy this past summer to find that the Ireland I remembered, the Ireland I imagined, is still tucked away, but easily accessible with a bit of a walk along a country path on a warm summer’s day.

The Lake Isle of Innisfree

BY WILLIAM BUTLER YEATS
I will arise and go now, and go to Innisfree,
And a small cabin build there, of clay and wattles made;
Nine bean-rows will I have there, a hive for the honey-bee,
And live alone in the bee-loud glade.
And I shall have some peace there, for peace comes dropping slow,
Dropping from the veils of the morning to where the cricket sings;
There midnight’s all a glimmer, and noon a purple glow,
And evening full of the linnet’s wings.
I will arise and go now, for always night and day
I hear lake water lapping with low sounds by the shore;
While I stand on the roadway, or on the pavements grey,
I hear it in the deep heart’s core.

One thought on “Irish Hikes (part 1): Along Bog and Ben in Connemara”