I’ve been called a tea snob. Yes, I’m one of those people who buys organic fair-trade loose-leaf tea in fancy, boutique tea shops. It’s my weakness (along with chocolate). You can imagine how excited I was when I heard about the Lake Agnes Tea House above Lake Louise. Combine hiking, fabulous views, with a break for tea and biscuits, and it sounds like a recipe for a perfect day.

We saved the Lake Louise area until a bit later in our week in Canada, and I was glad for that. This is probably the most popular place in Banff, and it’s one of the few spots in the wide-open Canadian Rockies where you might encounter a sea of people.

Tourists milling about on the edge of Lake Louise – everyone trying to catch the splendor.

You get the sense that coming to the shore of Lake Louise – basking in the glory of the mountains and water in one direction, and the opulence of the Fairmont Chateau in the other – is the climax of a long pilgrimage. Given the assortment of languages I heard people speaking, most people traveled a lot further than I did.

The lake is certainly spectacular, but I think people also get stars in their eyes at the sight of The Fairmont Hotel. Perched on one end of the lake, it dominates the landscape. Along the lakeshore, in front of the hotel, thousands of tourists spill out from their luxury buses to snap photos and tweet their friends.

Moraine Lake, a short drive away, is not as well known as Lake Louise, but, I think, is a notch up on the ‘spectacular scale’. We managed to arrive at Moraine Lake after the larger hordes of tourists had left, so I actually enjoyed it much more. 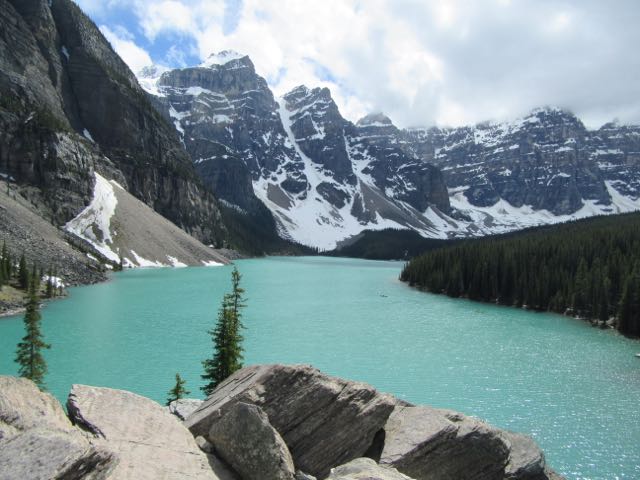 A visit to Moraine Lake (the whole are of Lake Louise, for that matter) feels a bit like being in a fairy tale. I wonder if anyone ever gets used to seeing water so blue from glacial rock flour.

I always hesitate to visit places that draw so many people. I don’t want to be one of crowd. But I can’t help it – we are all, in some ways, drawn to the same things as humans. Moraine Lake is one of those places that offers food for the soul. The day we visited was cloudy, and there were still lots of people. But I felt thrilled to be there.

Everyone seemed thrilled to be there. Is it the glacial blue water? The crisp mountain air? Snowfields gliding into smooth lake water? Or even the shared excitement of so many people? Whatever it is, this is one of those places where you start thinking about the march of time, and how very little time we spend on this planet – and how freakin’ lucky we are to even be able to witness places like this, for a short moment, in our short lives.

From the trail along the shore of Moraine Lake.

The only way to get to Lake Agnes is via a ~3 mile long trail that rises quickly above Lake Louise. Starting from the crowded lakeshore, once you climb 100 feet up along the trail you rapidly leave behind about 95% of the crowd. That’s not to say the trail is a tranquil nature experience. You’ll find a steady stream of people filing up the trail – but these tend to be the people that are ready for the outdoors, with sensible shoes and (hopefully) a bottle of water.

The crowds thin rapidly just a little way up the trail

It’s an uphill hike from the start, and it’s pretty relentless all the way. I saw two families pushing strollers on the wide, but unpaved trail, and I can only imagine what kind of workout that is! 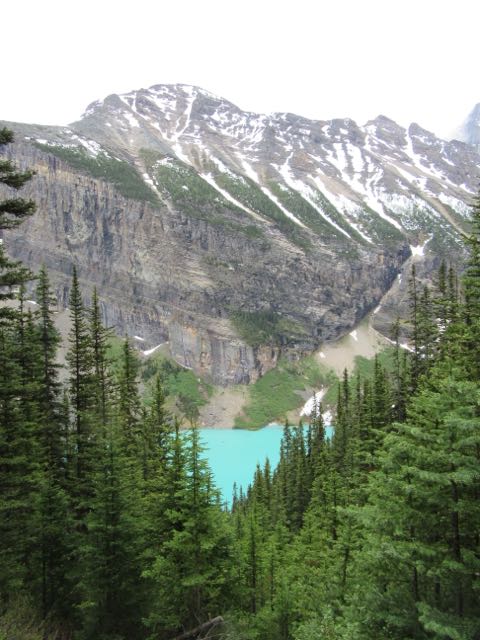 Lake Louise – a blue jewel hidden in the forest.

We get glimpses of Lake Louise on the way up – flashes of blue in the trees. Mirror Lake is a good point to take a rest. From here you have a choice of two different paths to reach Lake Agnes – a slightly longer path (by half a kilometer or so), and a shorter path. 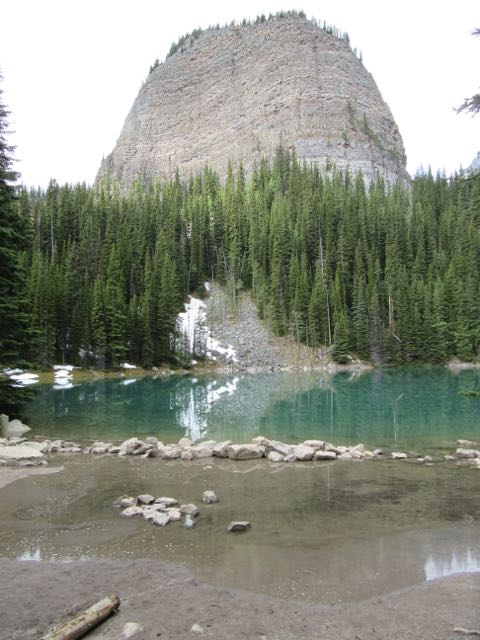 Mirror lake, on the way to Lake Agnes.

We decide to take the longer path, thinking it would be a little less busy – although, the slightly longer trail does not seem to deter any hikers. The trail winds up toward a waterfall at the edge of a hanging valley. Then a set of wooden stairs along the side of the water fall take you right up to the tea house, perched right on the edge of this valley.

The view from Lake Agnes Tea House…Still plenty of ice in mid-June!

It’s early enough in the season that Lake Agnes is still loaded with ice. It’s breaking up, but you wouldn’t want to take a swim. Big snowfields still cover the trail on the far side of the lake. 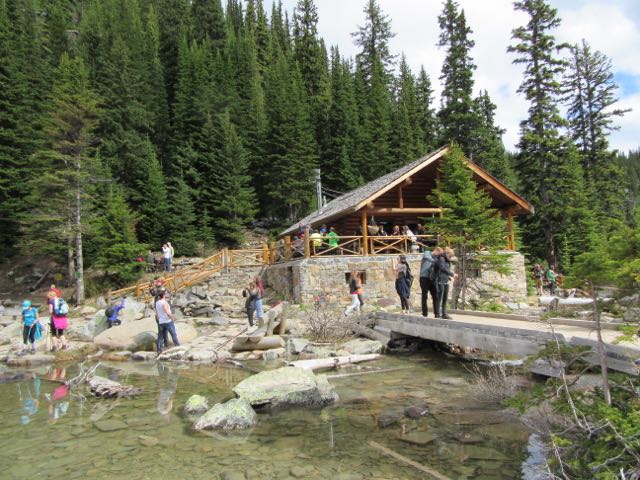 Lake Agnes tea house, at the edge of the lake.

The lake edge and the tea house are swarming with hikers. I’m a bit intimidated by the crowd in the teahouse, but knowing how much of a tea fan I am, my hiking partner encourages me to make my way in and find a recently vacated table. I feel a little bit like we’re in Europe – I don’t think I’ve been to any other place in North America like it. The Alps are full of little cafes at the ends of trails, overlooking magnificent places. It’s a tradition, I think. No smushed peanut butter and jelly sandwiches for hikers in the Alps! (Not that Europeans ever eat peanut butter.)

Somehow, we lucked out and snagged a primo spot on the deck to have our tea.

I was a bit worried that the ‘tea house’ would try to serve us some mass-produced, foil-packet tea – Lipton or Twinnings or Bigelow. But no – I was not disappointed in their selection! All loose-leaf. (Didn’t I say I was a tea snob?) They had a small selection of food for order, but from spying on other people, it looked like the homemade biscuits and jam would be a shame to pass up. 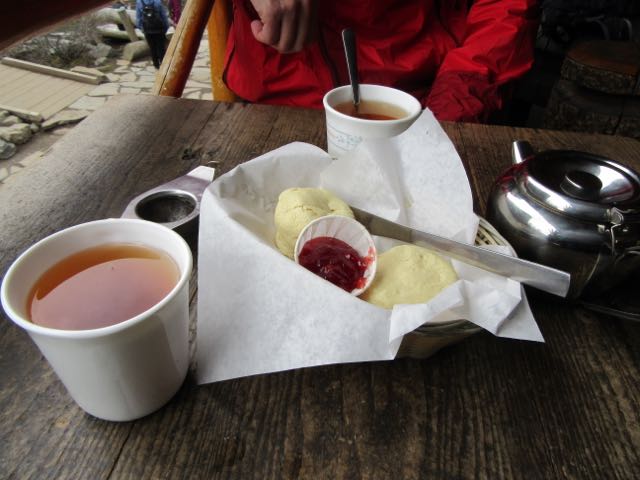 A mild white tea that goes by the name of ‘Mischief’, buttery homemade biscuits and jam.

We sat on the deck of the teahouse and waited for tea and biscuits in the sun and cool wind and amidst the camaraderie of other hikers. Despite the crowd, everyone seemed happy to be there.

The far end of Lake Agnes – still quite snow-packed.

After our tea and biscuits, we followed trail around the lake to the snowfields on the other side. It got a bit dicey for me to go to far, but I can just imagine what it’s like when the trail is clear.

Signs of spring along the lakeshore.

We also followed a trail a bit further to overlook of three lakes: Agnes, Mirror Lake, and Lake Louise. This was my favorite spot, and I could have stayed there, absorbing the view for a long time. 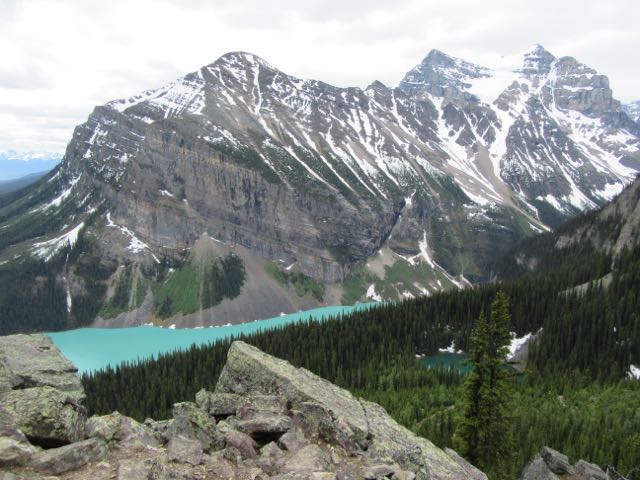 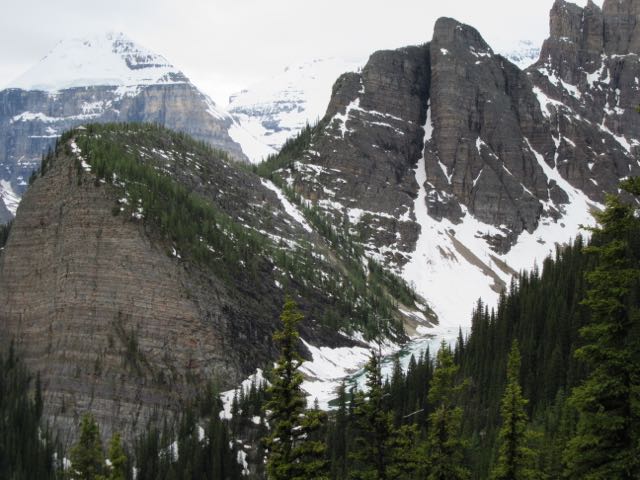 Lake Agnes from above – the Tea House is behind the trees.

The weather held out for us pretty well – we had a few glimpses of sunshine. As we descended the trail back to the crowds of Lake Louise, I wondered again about the draw of these magnificent places, and if experiencing them has an impact on people’s lives.  Can experience in nature influence people to live more sustainably? Do we want more people in national parks, monuments, and wild lands, as a way to help protect those parks? Or will more people do more harm than good?

The really cool thing about visiting Canada’s national parks this year is that it’s FREE, in celebration of Canada’s 150-year national anniversary. I fully expect that any of the crowds we saw were small in comparison to the people that will flood the park later this summer. These lakes in Banff are like natural temples, drawing pilgrims from around the world.

A few parting thoughts about the great outdoors

I think we all crave extraordinary beauty – something beyond ourselves – whether it be manmade or natural. Yet, a lot of people never really even get outside, at least, in the U.S. According to reports by the Outdoor Foundation, about half of all Americans participate in outdoor activities each year. I should qualify that by saying that they participate in AT LEAST ONE outdoor activity per year. About 1 in 10 people in the U.S. might be considered ‘outdoorsy’, and get outside two or more times per week. But jogging in the neighborhood park counts toward that.

While National Parks and Monuments certainly feel the impact of many visitors, at least in the U.S., we NEED those people! Climate change is on track to cause some pretty heavy-handed changes – not down the road, but at this very moment. And as National Parks in the U.S. are facing some serious cuts in funding and threats of developers moving in, the Department of the Interior (DOI) is considering abolishing or reducing MANY National Monuments.

(The DOI is presently – as of early summer 2017 – welcoming public comments regarding their considerations, and you can make your comments here – especially if you have experience in the places that are up for consideration, as a scientist, educator, or as a concerned citizen.)

Yes, it’s true that Trump donated his first 10 weeks of salary to NPS. This is a pittance. The GOP have been hoping to privatize the National Parks for years – some of this is simply out of spite for Obama and his work to support public lands – but I also wonder how much time these rich, old white guys (i.e., the GOP, in general these days – seriously, look at them!) have ever spent in the outdoors. They are in it for the money, and they don’t even bother to hide that anymore.

And if you’re wondering why I have to ‘get political’ about this, well, what I’m learning from our current political situation, in a world where the President of the United States has no qualms – and no apparent regrets – about making misogynist, hateful, often rambling, statements on a midnight Twitter feed, is just how important it is to use our voices in support of the things we value. It’s never been more important to raise our voices in support of environment conservation, social responsibility, and continued freedom of speech, among other things.

We need everyone to speak up for the places – for the ideas – that belong to all of us.

(And if I ever lose the freedom to argue for what I value here in the U.S., I do hope Canada will take me in – and you’ll find me spending summer days sipping tea at Lake Agnes. So, Happy (belated) Canada Day, too! Thanks for being great neighbors! )