Visiting Canada is, in many ways, like coming home. It’s full of familiarity – just as familiar as pulling up to your front curb and walking down the path to your own front door. Everything is just where it should be. Until you reach up to turn the knob on the front door and find that someone has replaced your round knob with a lever (this happened to me once). From then on, everything makes you feel slightly out of balance. In Canada, it’s the plastic feel of the money and the very interesting accent of your waiter that keep you grounded in the fact that you’re not in Kansas anymore (or, in my case, Colorado).

But, really, what is there not to love about Canada? From spectacular landscapes to wide-open, uncongested freeways, free health care, maple candies and ice wine. Canadians might complain about the low value of their dollar compared to the US dollar, or about long winters…but, hey, wanna trade – our president for your prime minister?

Bike trail across the Bow River in Canmore.

I spent the last week in Canada for a short break from the rising summer heat and non-stop US political insanity. I’ve only visited our northern neighbor once before, for a conference in Vancouver in 2014. To get there, I flew via Calgary, over the Canadian Rockies. I remember gazing out of my airplane window at roads winding through towering, jagged peaks and wondering what it would be like to drive through that maze of mountains.

Banff is the hub for most people visiting the Canadian Rockies. But at this time of the year (maybe at all times of the year) it’s difficult to find lodging there. Canmore, however, is only about 20 minutes away and was wide open. In the end, I’m really glad we stayed in Canmore. Unless you’re a Nordic ski fan, this community might be off your radar – but that’s what makes it great! While Banff is inundated daily by busloads of tourists, Canmore feels, at times, a bit dead in comparison. But the town has great restaurants and shops, it’s encircled by a magnificent array of peaks, and is riddled with a network of walking and cycling trails that run in and around the Bow River. If you’re really ambitious, you can cycle on a paved trail all the way to Banff (it would be uphill, just to warn you!)

View from the Bow River in Canmore.

Canmore’s claim to fame is that it hosted the Nordic ski events in the 1988 winter Olympics. It’s also a premier training spot for Canadian skiers. But unlike other places I’ve been to that have hosted Olympics (I’m thinking of Squaw Valley, CA, when I was a kid), Canmore is rather modest. You won’t know they hosted the Olympics unless you drive right up to the Nordic Center, where you’ll see a note about it on their welcome sign. You will also see the ‘cauldron’ that hosted the Olympic flame – unlit – next to the parking lot. 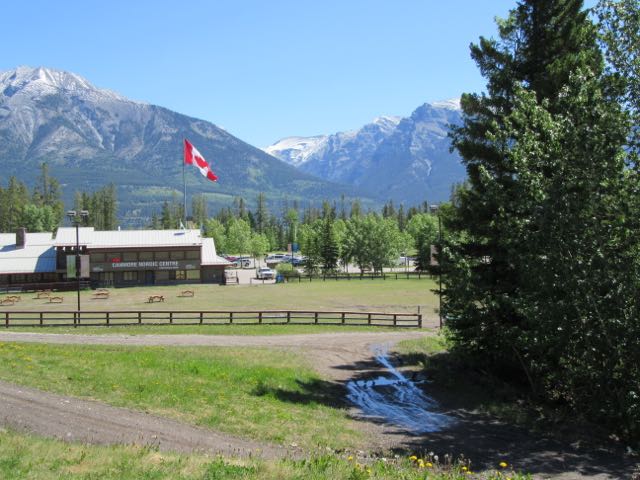 View of the Canmore Nordic Center from the trails. You might expect to find a lot more people here in the winter.

The Nordic Center is a Holy Land if you’re a skier, and my traveling companion (who prefers to remain anonymous) was in heaven. You’re thinking: But what do you do at a Nordic ski center without snow? Actually, a lot. The trails are open for running and hiking. The center has several set orienteering courses through the woods, a frisbee golf course, paved trails for roller-skiing, and mountain biking clinics.

Map of my orienteering course at Canmore Nordic. If you’ve never heard of orienteering, basically it involves running (or hiking) through the woods with a compass to find points on a topographic map.

What I’m calling ‘Summer Hike #3’ is actually a long walk and a short orienteering course I did in and around Canmore. We arrived the day after a spring storm had dusted the peaks with fresh snow – the air was crisp and cool, and perfect for walking or running. I spent my time exploring trails near the town center and along the Bow River, gawking at some of the spectacular views. That was followed by an orienteering up at the Canmore Nordic Center the next day. 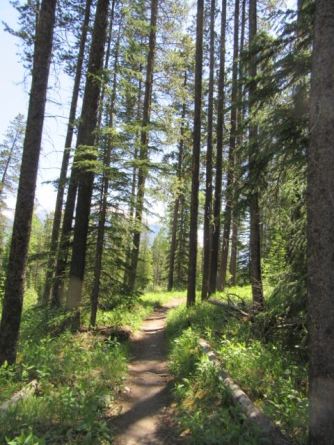 Along the trails at Canmore Nordic Center

I should mention – especially if you’re thinking of heading up to the Canadian Rockies at some point – that you will probably see a bear. The mountains and parks are full of both black bears and grizzlies. I have to admit, this produced a bit of trepidation about hiking around at Canmore Nordic and in Banff National Park. The recommendation is to carry bear spray and make lots of noise while you hike (bear bells won’t cut it). Bear spray is basically a type of pepper spray, and technically a weapon – so you have to buy it when you get to Canada – and leave it there if you’re catching a flight.

Of course, if you’re going to use this stuff, you have to be ready…So after acquiring this bottle, we had a round of ‘quick-draw’ practice in the Canmore Nordic parking lot. They actually sell holsters to wear it along your waist, although I kept it in the water bottle holder along the side of my backpack. I’m not sure how quickly I could get it out of there under stress. Fortunately, I didn’t have to put that to the test.

And I know you’re wondering…

…the only bears we saw were from the safety of our car. I was quite happy from that vantage point. I had enough bear experiences for a lifetime while backpacking in California when I was younger (other stories, for other days – but this may serve to remind some readers of this blog of those California black bears – who really enjoyed people-food and toilet paper).

Kickin’ back on Canmore trails – bear free and happy.