I felt as though I had walked into an episode of National Geographic. There it was, the famous blue-footed booby, less than 5 feet away, contentedly situated atop a small rock, and staring at us with alien eyes. He didn’t even blink as cameras shuttered and beeped. I’m guessing that this particular booby – and every booby on North Seymour Island – is already featured in thousands of photo albums and Facebook pages. 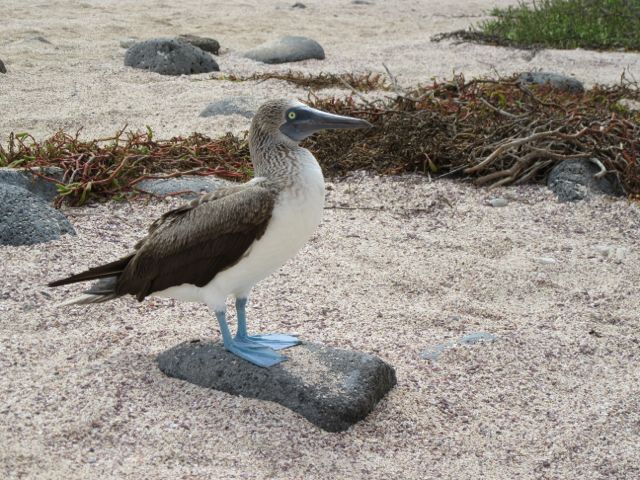 The blue-footed booby, along with the giant tortoise, are the iconic creatures of the Galapagos. Although, iguanas and sea lions are prominently featured. And if you’ve ever studied biology, you’ve heard of Darwin’s finches. Yes – that’s right – the Galapagos Islands is the place that inspired Charles Darwin to formulate his theory of evolution. I’ve met enough people who don’t quite know where the Galapagos are, that this warrants a short geography lesson before I go much further.

The Galapagos are a group of volcanic islands straddling the Equator, about 500 miles  to the east of South America. The flight from Ecuador’s coastal city of Guayaquil to the Galapagos is about an hour and 40 minutes. So it’s way out there. Coincidentally, it’s in the Mountain Daylight Timezone – same as Denver, whereas the mainland Ecuador is in Central Time. If you could take a flight directly south from Denver, you would eventually fly over the Galapagos.

The Galapagos are a part of Ecuador, and they are governed as one of it’s provinces. There are about 25 to 30 thousand people living there who are citizens of Ecuador. However, there are a number of restrictions put into place to try to protect the fragile balance of wildlife there. For example,You can only move there if you were born there, or marry someone from the islands.

The view upon arriving on the Galapagos. These little islets are named ‘Daphne Major’ (background) and ‘Daphne minor’ (foreground). Daphne Major, a relatively inaccessible volcanic cinder cone (really, they’re both rather inaccessible), was the site of a multi-decadal study of finches during the 20th century.

You can only fly there from Guayaquil or Quito and you’re required to undergo agricultural inspection before you leave (and once you arrive, there are dogs sniffing your bags). When we arrived we had to walk across a plastic mat full of soapy water to clean our shoes. Most of the islands are National Park land, and it’s the only national park in Ecuador that requires an entrance fee. The moment you get off the plane, you’re required to fork over $100 per person, cash. I’ve heard rumors that the fee will soon be rising to $200, to try to limit further the number of tourists.

The main airport is on an old US military base on the small island of Baltra, to the north of the most populated island of Santa Cruz. Of course, the US no longer has a military presence there (or pretty much anywhere in Ecuador, anymore), but why build another airstrip when they can use the one that’s already there?

Cactus trees towering over thick undergrowth on the windward side of Santa Cruz Island, near the Galapagos’ biggest town, Puerto Ayora.

Many people might be surprised to land in the Galapagos and find themselves on a broad, deserted volcanic plain, sparsely populated by cacti and other drought tolerant plants. Like many tropical volcanic islands, there is clearly a ‘dry side’ and a ‘wet side’. We stayed on the island of Santa Cruz, where the mountains are tall enough to intercept moisture carried by trade winds. While the airport at Baltra is dry (particularly in July), the highlands are thickly forested by the native trees that are relatives to the sunflower, as well as the more invasive cedar and blackberry bushes. The lowlands on the ‘wet side’ host a forest of cactus trees. On the dry side, you would find similar vegetation, but much more sparse.

Despite their location right along the Equator, Galapagos weather is typically under the influence of the cold Humboldt ocean current that runs from south to north along the west coast of South America. This cold ocean current keeps waters cool and nutrient rich – about 72F, and tends to create cloudy, drizzly days in the Galapagos, especially from June through September. In December through February,  when the current weakens, it gets hot. The hot weather fuels thunderstorms.

However,  under the influence of El Niño, things can be quite different. Given that we are at the start of what looks to be one of the biggest El Niño events ever (I’ve seen it described as the ‘Godzilla’ of El Niño events), I was curious to see what type of weather we would have. The water was quite warm for July, and day time temperatures quite hot. But it was still rather dry for an El Niño. That doesn’t mean it will stay dry.

The locals and guides kept saying that ‘El Niño hadn’t come yet’ – I kept questioning that because I could see that we were experiencing atypical July-weather. I finally realized that what they were referring to were the HEAVY El Niño rains. Apparently, during the El Niños of 1997-8 and 1982-3, it rained every day for over a year. This type of rain is hugely disruptive to wildlife and natural vegetation. Penguins, especially, who prefer the cooler temperatures, suffer.

With only 5 days on the islands, we decided to base ourselves on the island of Santa Cruz, and take day trips from there. Most people take cruises when they visit the Galapagos. And you can find cruises for an array of budgets. But even the cheap ones are quite pricey, and from what I saw, not altogether on the best of boats. I’m also prone to seasickness, so I was quite happy to have my feet on solid ground each night. 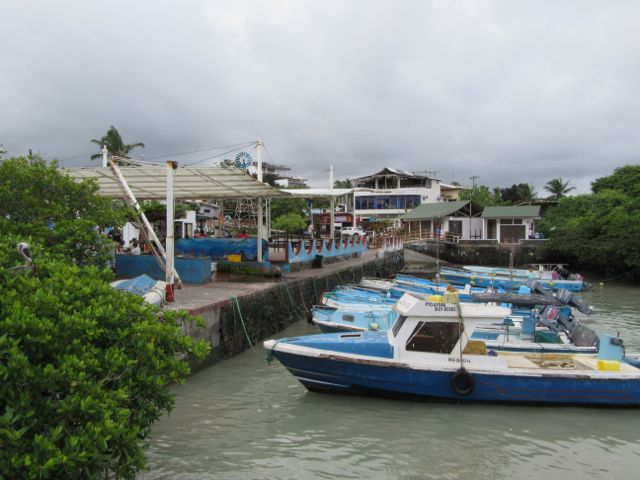 Fishing boats in Puerto Ayora. If you look carefully, you’ll see a sea lion hanging out on the dock, waiting for leftovers.

Staying on Santa Cruz also allowed an opportunity to get a better feel for local life. Puerto Ayora is really a sleepy tourist town – I know that activity peaks in December and January, but it is certainly sleepy in July. At the edge of town sits the Charles Darwin Research Station.

The Charles Darwin Station is the primary center for scientific investigation and ecosystem and wildlife conservation on the Galapagos. It is primarily known for its turtle breeding program. With the arrival of cats, dogs, and people on the islands over the past 100 years, the Galapagos tortoise population took a major hit. Tortoises under the age of 5 are especially vulnerable to predators.

Baby turtles at the Charles Darwin Research Station. These are all less than 2 years old.

These days, most of them are rounded up and raised at the research station until they’re old enough to survive on their own in the ‘wild’ or, what’s left of the ‘wild’. Most of the giant tortoises hang out in orchards now, where they have easy access to guavas and bananas. That, and the fact that they no longer have to worry about being kidnapped by pirates and kept on their backs below decks in some galleon until the sailors got hungry, means that they can enjoy a pretty good life. 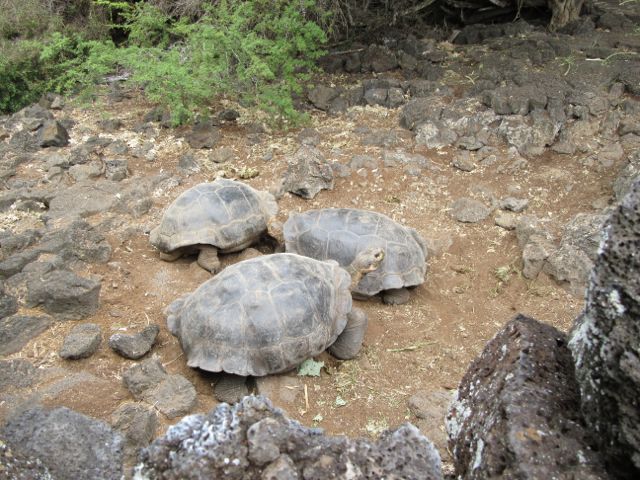 Some of the giant tortoises at Charles Darwin Research Station.

The Galapagos, long untouched by people, have had a pretty rough time of it over the past 200 years, and things are still a bit rough. While much of the Galapagos is protected, what happens in the future will depend in part on whether Ecuador has the financial resources to continue protecting it – and what effects changes in the frequency of El Niño might have on wildlife. At the moment, there is, fortunately, still an abundance of wildlife. More posts coming soon on some of the highlights in the waters around Isla Santa Cruz!

The beach near Charles Darwin Research Station. Tour boats docked at Puerto Ayora in the distance.

One thought on “Pilgrimage to the Galapagos – First impressions”