I sometimes like to imagine that the people I have loved and lost are sitting on my shoulders, riding along through life with me, marveling at the world as much as I do.

Last January, I stepped onto the continent of Antarctica. I’m fairy certain I’m the first person in the history of my family to do that. In the months leading up to my trip to Antartica, I thought a lot about my Mom – how thrilled she would have been to go on a trip like this. Or, at the very least, she would have followed every tidbit of news from Homeward Bound about our journey. She passed away five years ago on June 1st, but I clearly felt her with me as we stepped off the zodiac for our continental landfall. 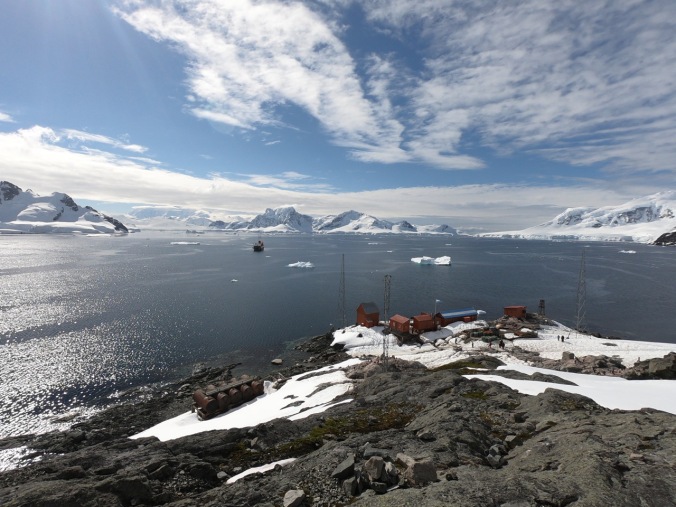 My perspective, standing on Antarctica. It’s much warmer than I thought it would be.

Being able to do something as exciting as stepping foot on the polar continent with a group of amazing women from around the world makes me think of all the women that have come before me – all the women in my maternal line going back through the centuries. All of these women have played a role in who I am now.

I think about my maternal grandmother: Edna, who was born on Christmas Day in 1917. She valued education above most things, but she never even had the opportunity to go to college herself. It wasn’t a thing for women in the mid-20th century to go to college. And I don’t think she would have ever imagined traveling the world on her own. I celebrated her 101st birthday in Ushuaia, Argentina, waiting for my ship to Antarctica. What would she think of that?

I also think of Edna’s mother, my great-grandmother, Martha. We called her Nanny. She was born in the Ukraine in 1895. It fascinates me to think that when she married my great-grandfather in 1915, Earnest Shackleton and his crew were enduring an Antarctic winter stuck in pack ice in the Weddell Sea. Nanny passed away when I was 12.

I remember thinking  about all the changes she must have witnessed in her life: the emergence of automobiles, televisions, telephones and air travel (not sure she ever actually rode in an airplane). I remember, as a kid, having to explain to her how a tape recorder worked. Looking back, I’m not sure if she was just humoring me, or if she really didn’t understand how it worked. But now I find it’s hard for me to keep up too sometimes, and I think I understand the confusion Nanny had with the tape recorder when I try to do things on my iPhone.

She didn’t even have the right to vote when she got married.

The glassy waters of Paradise Bay.

One of the things that is so moving about visiting Antarctica is the sense you get that there are still places that are relatively untouched by human activity (if not actually untouched thanks to rising greenhouse gases).

On the morning of January 13, 2019, we made our way to an Argentinian base in a small inlet where we would step foot on the continent of Antarctica for the first time.

View from the upper deck of the MV Ushuaia as we made our way toward Argentina’s Almirante Brown Antarctic Base (near the waterline next to a rocky outcrop in the distance).

To reach the inlet where we would do our landing, we had to traverse Paradise Bay. Paradise Bay is only one of two places where ships can offer a continental landing along the Antarctic Peninsula. At the other site, in Neko Harbor, our landing was cancelled due to shifting brash ice. We were excited about the possibility of finally stepping foot on the continent and eager to do a mini-hike up the hill behind the tiny cluster of buildings that make up the station.

The water in Paradise Bay was dark and smooth, dotted by ripples from rafts of penguins porpoising alongside our ship. The sun in Antarctica often looks silver – almost like a bright moon – and the light seems to shimmer in the air, just as it does on the water. I felt as though we had left Earth behind.

I could imagine my Mom in this place. I’m willing to bet that if she had lived, after following our adventure with Homeward Bound, she would have booked a trip here herself.

Brown Station (the cluster of small red buildings on the left), tucked away in Paradise Bay.

As with many of our Antarctic landings, as I stepped out of the zodiac, I found myself assaulted by the odor of Gentoo penguin colony. We then navigated a slushy path around the buildings of Brown station, sidestepping gooey mud and penguin poo to reach the trail that had been staked out for us in the snow up to the top of a rocky outcrop. This is Antarctica’s version of the red carpet.

Hiking up the steep hill behind the station, it felt strange to be at the icy end of the earth, pulling off my hat, gloves, and heavy jacket because I was sweating up a storm beneath a burning silver sun.

I’ve mentioned the ‘warm’ Antarctic weather in previous posts. But the climb up the hill behind the station was sweltering. The temperature was about 45F, and the snow, while quite deep, was soft and wet, so my feet sank in with every step.

When I tell people I’ve been to Antarctica, they often think first about images they’ve seen of the South Pole: a featureless white desert, where your eyelids will freeze over in a moment. Most people are shocked to hear that summer on the Antarctic Peninsula can be much warmer than Colorado in January.

Hiking up the hill behind Brown Station.

It was about a 300 foot hike up the hill, and, while I might be able to claim to be the first person in my family to step foot on Antarctica, we were clearly not the first people there – even since the last snowfall. From the summit, we had stellar views of a nearby glacier and Paradise Bay. Like most glaciers we encountered in our Antarctic explorations, this one was also grumbling and creaking in the sunshine.

The glacier across a small inlet from Brown Station – sitting heavy under it’s own weight on a hot Antarctic summer day.

Everyone stripped off their jackets and gloves to find a place in the snow to sit and enjoy the view. 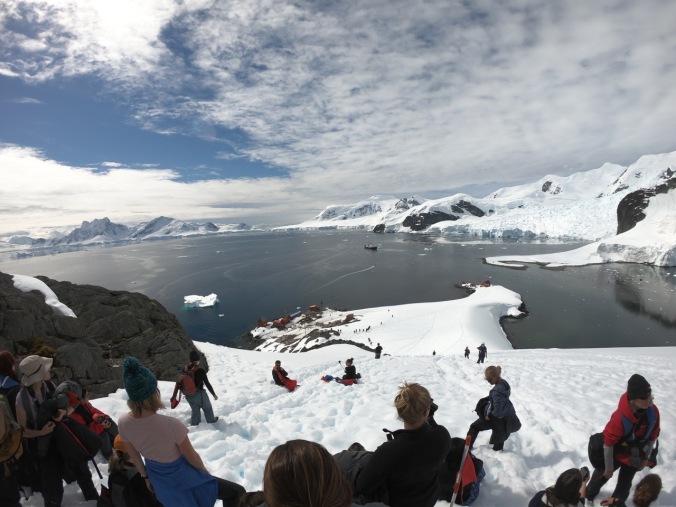 Our view from the top of the hill. The MV Ushuaia sits in the bay beyond.

Each of the women here comes from a long line of women who have enabled them to be who they are today. Each of us on this journey is hoping to shape the next chapter in the long story of  this planet. We hold the hopes and dreams of the women who came before us, now viewed in the context of a planet that is much smaller than it’s ever been.  We also hold fears that they could not imagine. But we have a voice in the world that our mothers did not have, and a big part of Homeward Bound was learning what it means to use that voice.

We are quickly exhausting the planet’s ability to keep up with our need for resources that sustain human civilization as it is. 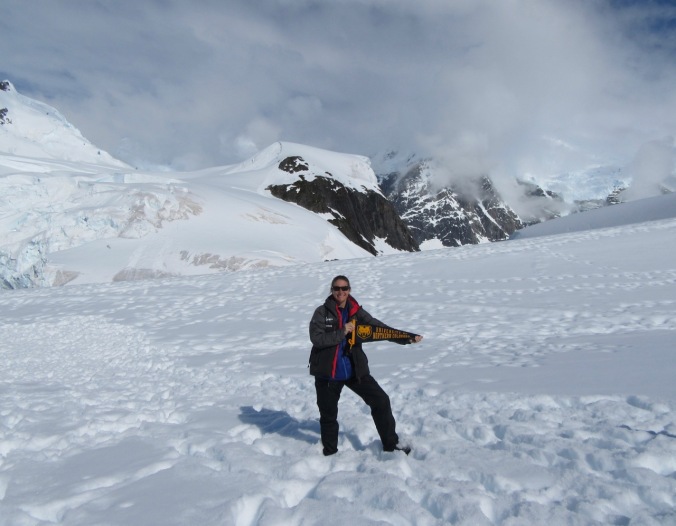 Displaying my UNC banner on a well-trodden Antarctic snow field.

In stepping foot on Antarctica for the first time, I felt the cumulative pride of all my mothers and all that they did to make this happen. I also felt such a heavy responsibility to keep trying to find new ways to wake people up to the idea of taking care of this planet. But I think part of what I learned through Homeward Bound is that none of us has to go up against a tide of ignorance and apathy alone. Our collective voice has the greatest impact. While social media has major pitfalls, it does have the advantage of allowing us to build that collective voice. That’s something our mothers didn’t have.

Long after my footsteps have melted from this slushy Antarctic hillside, even long after my footsteps have vanished from this Earth, I hope I have a chance to come back and ride around on someone’s shoulder to see a civilization that’s found a way to adapt and grow through the challenges of climate change. It’s hard to imagine what that looks like – just as my great-grandmother probably couldn’t envision the world we live in today. But trying to imagine it sets us all off in the right direction, and that gives me a bit of hope.

One thought on “Continental landfall in Paradise Bay”