Imagine a high, windswept, rolling plain, with tall grasses sprouting from spongy soil. This is a place where you can watch the clouds and feel them engulf you before they scurry past, as they race to the next mountain top. The sky here is ever-changing, offering an occasional glimpse of blue, where wispy cirrus cruise by at a leisurely pace high above compared to the ragged cumulus and foggy patches that race by just above your head.

Llamas on the páramo. They were our audience as we hiked to one of the weather stations.

How often do you ever sit and let yourself watch the clouds? Despite the fact that I’m a meteorologist, until I arrived in Ecuador, it had probably been years since I granted myself this luxury. Of course, I always watch when there’s a storm brewing back home. And on any other day, I might take notice of the type of cloud, or grab a brief glance at sunset. But I never just sit and watch the clouds.

Walking across the Páramo, just underneath the clouds.

So I made cloud observation one of the assignments for students taking my first ever meteorology field camp course. Four intrepid students, who also took the 10-week meteorology course I taught in March through May, signed on to gather weather data overnight on a mountain top. 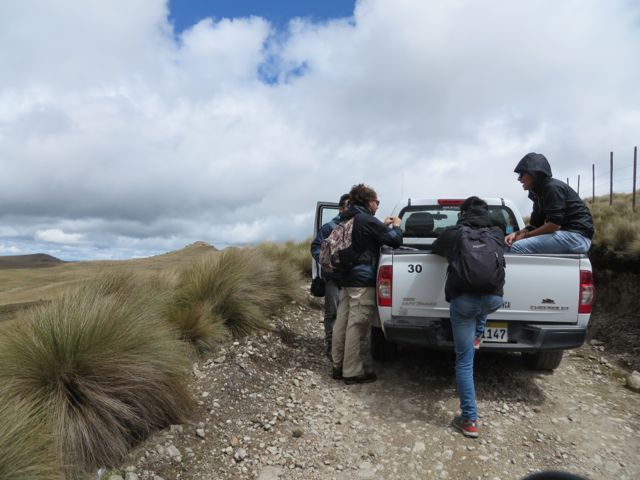 Those of you who know my work might find this amusing. I’m a climate modeler. I work with computers to study things that happen in the atmosphere over very large time and spatial scales. I never imagined my work would take me to the windswept rim of a broad, ancient volcano, where I would be directing this group of investigators on the placement of temperature and relative humidity sensors. Ten years ago, if you had asked me to lead students on this type of micrometeorological mountain experiment, I would have run in the other direction – feeling completely out of my element. But this is what 10 years teaching in a small meteorology program has done for me – I feel like I’ve earned another PhD in ‘all-around meteorology.’ 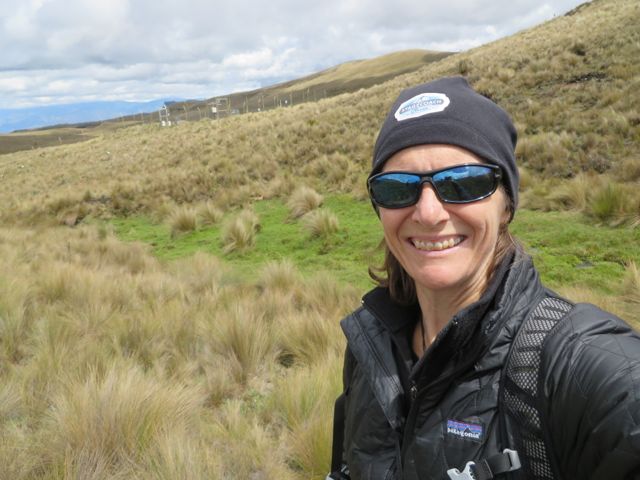 The University of Cuenca has been offering summer field programs to attract potential students for a couple of years. After the 10-week meteorology course I offered in March through May, several of my students were really interested in having a camp with an applied meteorology focus. 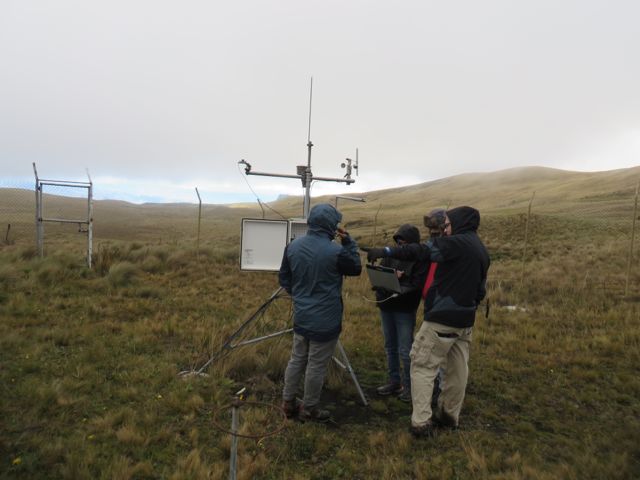 Downloading data at one of the weather stations.

Our mission was to record the minute-by-minute changes in temperature and relative humidity along an altitudinal gradient from mid-afternoon on one day through mid-morning the next day. Our field site was the mountains to the south of Cajas National Park, about a 2 hour drive from Cuenca, and about 4000 feet higher in elevation.

The University of Cuenca already has a couple of weather stations on this mountain, and another in the village at a much lower elevation. But we wanted to know what differences we might find in the daily cycle of temperature at the elevations in between the two higher stations. We also wanted to see how well we could forecast the weather, given limited resources.

Setting up sensor number 1 in the páramo.

Those of you familiar with weather forecasting in the United States or Europe may not be able to fully appreciate the plethora of tools you have at your fingertips. There are so many models and observation networks designed specifically to forecast weather in midlatitudes. The Tropics, however, are a different beast, and while many people have worked hard to understand how to forecast tropical storms, there is virtually nothing on tropical mountain forecasting. About the only tools we have to help us are satellite images and the Global Forecast System (GFS) numerical model. Because the model only captures large-scale changes in the atmosphere, we can really only use it to give us a rough idea of large-scale changes in wind patterns. Everything else involves some educated guessing.

The permanent weather station in the high páramo at ~3800 meters elevation.

I really wanted to give the field camp participants a chance to think about the type of work that needs to be done to understand the weather in the Andes. These students are the future of meteorology in Ecuador – and they have a lifetime of work ahead to not only figure out meteorological patterns, but how these change in the face of global warming.

So we set up instruments at intervals of 100m in elevation along an old road leading up to the ancient volcano crater. High enough to catch the full impact of the clouds of mist billowing upslope, and well enough away from the herd of nearby llamas.

Llamas in the mist. 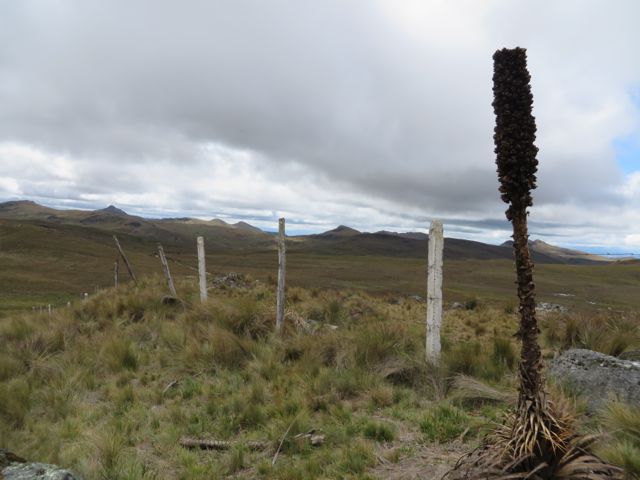 On the edge of an ancient volcano crater.

We placed our highest instrument at an elevation of 3800 meters (about 12,500 ft, for those of you accustomed to thinking that way!). Even though I’ve been living at about 2500 m (over 8000 feet) for more than four months, the added elevation is still enough to make my heart pound!

We were lucky to have some clear weather on the first day, in part because the changing cloud cover has some interesting effects on temperature though the day and into the night, but also because it was simply much more pleasant than having to ward off driving rain or incessant drizzle. It also made for great photo opportunities, and a chance to see a hawk that popped up from behind the hills to float on the wind only a few meters overhead.

We stayed in an old mining camp at 3700 m elevation. Rustic, but comfy enough, with a kitchen, dormitories, flushing toilet, etc. The area is still an active mining region, which makes it pretty valuable, economically. 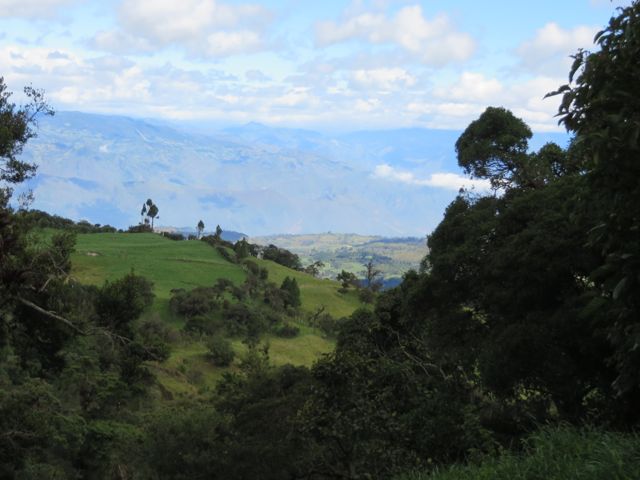 Peeking through a small patch of native vegetation to farmland below.

The area is also valuable for its farmland – at least, until you reach the elevation of the páramo, which is really impossible to cultivate. But it’s a bit sad to see so much farmland in Ecuador, knowing there is so little native vegetation remaining. You really only find the native vegetation in small pockets, in steep gullies, along creek sides – everything else has been removed for farming. How can this fertile land, made fertile by the native vegetation, support intensive agriculture much longer?

Clouds topping the marine boundary layer that moved into the Yunguilla Valley below. This photo was taken at sunset, but that air likely moved onshore in the mid to late afternoon.

Overall, I think our first Meteorology Field Camp was quite a success. While there were no extraordinary meteorological events that night, it’s still possible to learn a lot by witnessing the quiet changes over the course of an evening – changes in temperature associated with a passing cloud, or the effects of topography and elevation on relative humidity through the course of a night. That’s one of the great things about studying meteorology – you can do it anywhere, anytime. You don’t always need to see at tornado (Although, I know that if any of my students or former students back in the States are reading this, they might argue with me about the need to see a tornado, and are probably wondering when we’re going to offer  Storm Chasing 101 at UNC.) 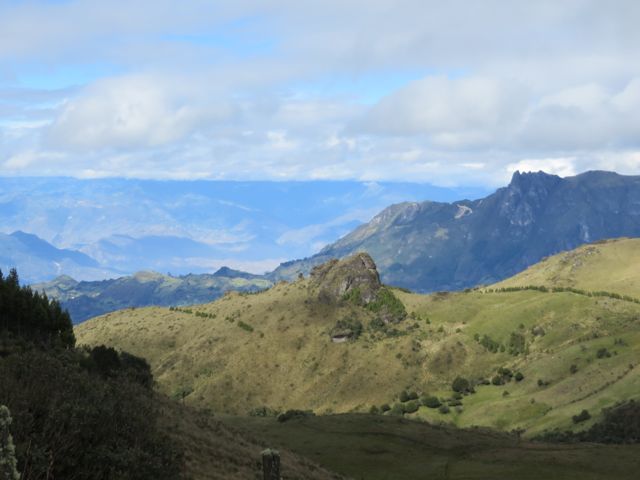 The Yunguilla Valley in the morning, after the clouds have burned off.

One thought on “Meteorology Field Camp in the Andes!”